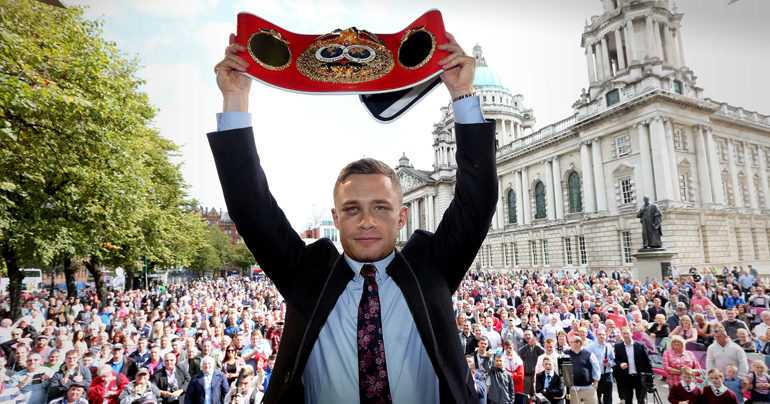 People in Belfast are ‘fed up to the back teeth’ according to a new report out today by the Department of Reports, which suggests that folk are only watching tonight’s Carl Frampton fight because they are ‘bored’ with the lack of conflict happening lately.

“Aye its been a wile dull couple of weeks” admitted Officer Ted Sockfluff from Antrim Road Police Station “we’ve hardly lifted our finger to do a tap all month. I’ve reorganised our riot gear three times out of boredom. First into alphabetical order, then by size and lately by body part. Now we can get ready for a riot from the feet up. It’s class!”

The new riot procedure is already paying dividends as Sergeant Nigel Mothball explains. “Aye, we’ve been so cheesed off lately we’ve been sticking the riot gear over lunch and battering each other for the craic. Don’t get me wrong, we’re happy everyone in Norn Iron has finally wised the bap and get along now, but we still need the exercise. Plus, turns out ye can get a quare ‘n handy shower from a watercanon!”

Across the city the mood seems similarly dejected as people clamour for a bit of excitement in their lives. “I haven’t been out the door in weeks!” confessed Orange Order member, Jim Earwax. “Well except to take the odd walk, but that’s just for exercise mostly. If it wasn’t for my walking club I’d probably be up the country somewhere rambling. Kinda like Gregory Campbell.”

The malaise is being felt in all communities across the city too. “Thank feck for this Daryl Crampton scrap tonight!” said North Belfast boxing fan, Niall Clippings. “We’ve been going out of our minds up here lately. Be good to see a few digs been thrown finally after weeks of feck all happening! I’ve invited my muckers over and they’re all pitching into cover the pay-per-view charge.”

“None of them have copped on its on ITV yet” he smiled  “so all going well it’ll be a free carryout for me!”