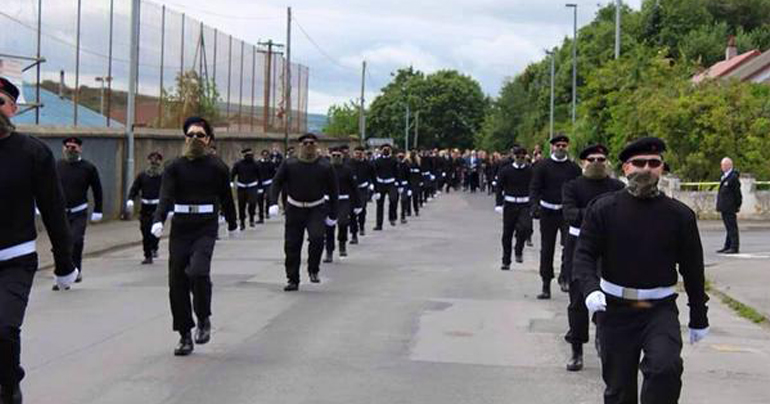 Owners of Army Surplus stores in Northern Ireland are celebrating after a week which brought “dressing like an paramilitary arsehole” back onto the high street.

The news comes after we saw three amusingly sunglassed Loyalists put on a display of antique weaponry on Monday, followed by a demonstration of formation black beret and gloved marching at the funeral of the mother of hunger striker Patsy O’Hara in Derry yesterday morning. For good measure the funeral of leading loyalist ‘Bap’ Lindsay added an impressive range of paramilitary flower arrangements to the mix.

“It’s good news all round,” said Dick Webbing, owner of Dick’s Uniforms in Strabane. “We’ve had a hard time in the Army Surplus trade since the ceasefires, there’s only so many fishing and hunting enthusiasts out there. But now we’ve had a bit of a rush on dodgy berets, jackets and camouflage scarves. It’s just what the trade needed.”

“It’s very much a retro 1980s look,” said style expert Hugo Hamilton, “the classic black jumper with white belt is very slimming, while the mask lends the wearer an air of mystery. It’s all about dressing for the past whilst having nothing to offer the future, and really seems to be THE look for the summer.”

However not everyone was pleased with the return of ‘paramilitary chic’, with media commentators and representatives of the various Unionist, Nationalist and Republican parties queuing up to mock or condemn the dress sense of whichever organisation they disliked more.

“What happened at that funeral/press statement was disgraceful,” was a common reaction, “it’s time that the police did something about about themuns carrying on like that.”

Police did eventually release a statement on the sinister fashion trend though. “We’re delighted to be chosen as the official sunglasses of choice for dickheads in Northern Ireland.” said company spokesman Jim Shady

“We’re doing a great deal on our aftershaves at the minute too!” he added.