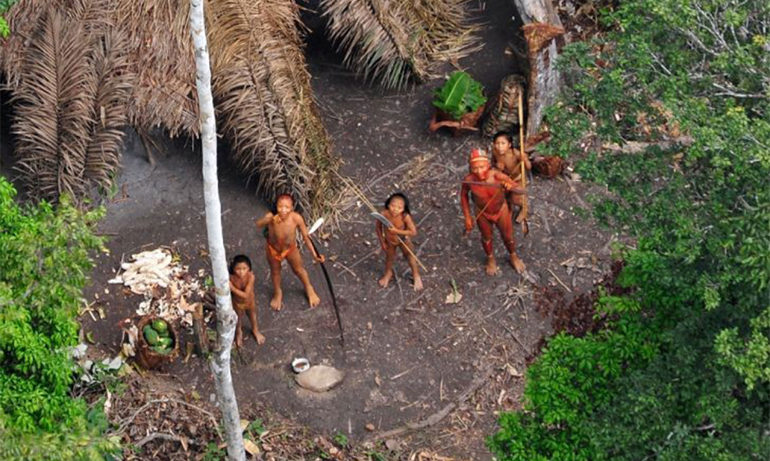 There have been renewed calls for the Department for Infrastructure to improve its management of grass verges amid claims that a ‘lost Amazonian tribe’ is living on a roundabout in Craigavon.

The news came to light after a police helicopter patrolling the area was pelted with spears and stones as it flew over the town’s picturesque Roundabout Number 6. “We were heading to Costa at the Rushmere Centre, when we came under sustained attack,” Sergeant Bobby Peeler told us, “at first we thought it was just the locals, but when we zoomed in with the camera it turned out to be a load of boys with bones through their noses dressed in loin cloths, angrily waving spears at us outside some mud huts.”

“To be honest that didn’t really provide conclusive proof that they weren’t locals,” he continued, “so after a coffee we contacted experts at Queen’s University.”

An expedition to explore the roundabout was organised, and early radio transmissions from the intrepid academics seemed to confirm that there is indeed a primitive Amazonian tribe resident on the roundabout. Sadly all contact was lost with the explorers several days ago, leading to fears for their safety. “God knows what’s happened to them,” says a sceptical Sgt Peeler, “it wouldn’t be the first case of cannibalism in Craigavon.”

“The situation is critical,” Upper Bann MLA Pampas Nettle told us. “As well as the Amazonian tribe we’ve had reports of wild animals living in the grass verges in the district. I’m told it’s like Jurassic Park on the road to Gilford.”

“The whole country is going to shit,” admitted DfI spokesman Gordon Pothole, “but if you read the local papers you’d think the only problem we have here is that the grass on roundabouts and verges hasn’t been trimmed recently. MLAs love that kind of issue, as it allows them to complain a lot and that makes it look as if they’re doing something.”

The Department has now issued every MLA with a petrol strimmer and a high-viz vest. “We might as well get a day’s work out of them, and they can let on to be serving the community for a change,” said Mr Pothole.