Belfast Zoo animals to be replaced with live human exhibits. 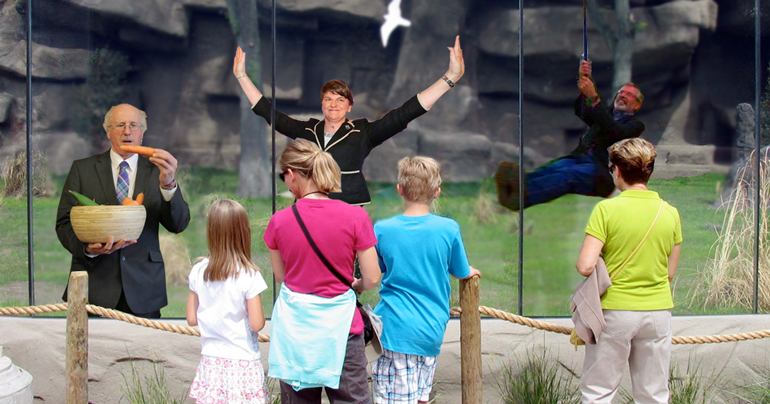 In light of the recent controversies over the cost and ethics of Belfast Zoo, the City council has sensationally voted to replace the entire stock of animals with real, live human exhibits.

“We’ve loads of exciting things lined up,” said the Council’s Head of Recreation, Victoria Park. “This’ll be a real shot in the arm for the zoo, and it’ll create loads of jobs for people who want to take over from the animals.”

Visitors will see the very best of human nature from across Northern Ireland, with the ‘Lying Enclosure’ – an exhibit of local politicians – bound to be a big attraction. “We’ve got a full Pride of Liars lined up,” says Park, “so we can expect to hear plenty of roaring, particularly at feeding time when we stuff brown envelopes through the bars.”

The Monkey House has been replaced with a shiny new Broadcasting House, packed full of regional television celebrities eager to earn a few quid. “It’s not every day you get to see Rose Neill grooming Pamela Ballantine,” Park explains, “That should prove a hit with middle-aged men, though to be fair the sight of Jackie Fullababoon’s big red arse might be a bit much for some.”

Experts have also found willing exhibits for the ‘Lurganquarium’, Ms Park told us. “We’ve had no problems there,” she says, “There’s a queue of applicants a mile long looking to get out of the place. Hopefully they’ll feel at home, there’s even a wee model railway line they can put hoax bombs on for the visitors.”

Other attractions under consideration are believed to include C’Merecats – a bunch of hoods in grey trackie bottoms who’ll try to nick your phone; a Bare Pit – which may or may not contain Sammy Wilson; and an Omaghngutan enclosure – a cage full of hairy ginger creatures who communicate mainly through loud whoops.

However plans for Free Presbyterian pen are on hold after the exhibits began chaining themselves to their swings on Sundays.