Best part of Christmas is going to the dump, admit men 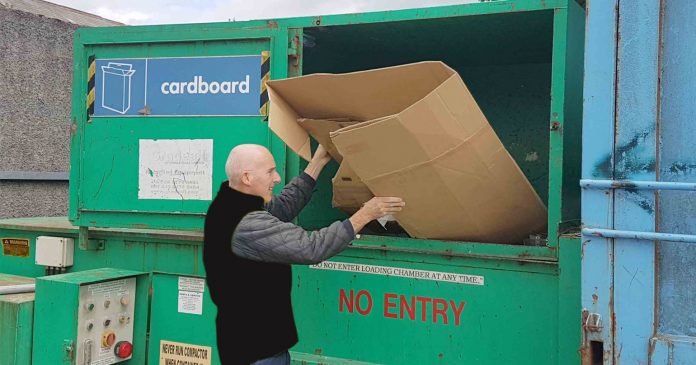 Men couldn’t wait for Christmas to be over so they could take all the packaging everyone had left at their arse to the dump, it has emerged.

“Going to the dump is the best part of Christmas!” revealed 35 year old part-time dad, Wayne ‘The Brock’ Johnson this morning at the Comber Recycling Centre. “I actually found this place by mistake after taking the wrong turn for the Dundonald Ice Bowl once… but it turned out to be far better craic!”

“The machines are more suitable for people my age,” he explained. “You can spend hours on end crushing cardboard, separating electrical items into the right cage and sorting wood, metal and plastic into different skips! It’s great craic.”

“The kids were bored out of their skull,” he admitted. “but now they know how I feel when we go to Indiana Land.”

Craigavon man Craig Avon agreed. “Going to the dump in Banbridge is my favourite part of Christmas! It’s such an impressive setup. I’m taking the wife there for our wedding anniversary next month.”

Council refuse sites have become so popular that Northern Ireland Tourist Board have been forced to list them on their website as destinations, after they all got five star reviews on TripAdvisor.

“Dumping cardboard packaging the day after Christmas is a long-standing Northern Irish tradition,” explained local historian, Glen Gormley. “In fact the term ‘Boxing Day’ actually derives it’s name from this ritual – but not cos of the cardboard boxes.”

“It’s cos people are always skipping the queue and coming to blows.”

Rumours that Carl Frampton will fight Barra Best at Blackstaff Way today over who gets to use the cardboard compactor remain unconfirmed.