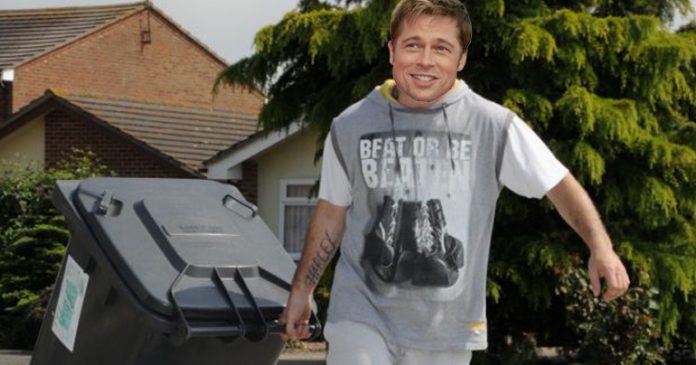 In an exclusive interview with The Ulster Fry, Hollywood superstar Brad Pitt has revealed that the traditional non-recyclable black bin day gets his vote over all other bin days.

“No doubt about it,” he told us, “It’s hard to beat the feeling of squeezing the last black bag into a wheelie bin then dragging it out into the street of an evening. All the better if you’ve had to squash the bag in with a brush.”

“I mean, the other bin days have their place,” the star explained. “I like a brown bin day during the summer, and sometimes recycling day is welcome if you’ve been on the sauce and have a rake of cans to get rid of. But yer bog standard black bin is the business.”

When pressed further on the matter, Mr Pitt was forced to admit that he actually had a favourite black bin day.

“It’s a hard call, but if you pushed me I’d say the last lift before Christmas. You can go into the festive season safe in the knowledge you’ve an empty bin at the back door, ready for whatever you can throw at it.”

“I’m lucky though, at my house in Dundonald the last lift is the Friday before Christmas, it’d be a nightmare if it was meant to be Christmas day, or they only emptied the brown one when there’s feck all in it this time of year.”

Next week. Tom Hardy tells us why he prefers getting a Chinese in on a Friday instead of Pizza.