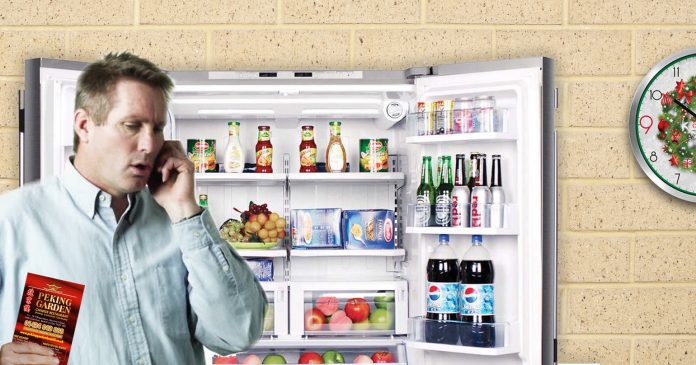 Chinese takeaways across NI are bracing themselves for the busiest night of the year, as people who have been out buying food all day realise they can’t be arsed cooking.

“We’re coming down with food here,” admitted Phil McCupboard, a part-time traffic light from Knocknagoney. “Herself was up early and re-routed one of the big Tesco lorries straight to up to our front door.”

“Now she’s erected a barbed wire fence round the kitchen and is threatening to shoot anyone who goes near ‘the good food’, so we’ll phone for a takeaway from the Hungry Golden Mandarin Panda Palace later.”

Freisa Fuller-Tucker, a 42 year old mystery shopper from Omagh who wishes to remain anonymous, told us a similar story. “I’ve so much food in we’ve had to build an two-story extension onto our fridge,” she explained. “It takes up most of the garden but hopefully the vegetable drawer will come in handy as a spare room after.”

“In the meantime we’ll be using it to store stuff we’ll throw out in a couple of days time!”

Jade Garden, the manageress of the Happy Red Peking Dragon Boat in Lurgan, told us that she’d booked 435 extra call handlers to deal with tonight’s phone orders.”Hopefully we can cope, but nothing says Christmas more than a massive pile of chicken balls with a curry half-half, washed down with a free can of coke that wasn’t for individual re-sale,” she explained.

We phoned Santa for a comment but he told us we had the wrong number.  “I ordered a 74, hi… beef and green peppers in black bean sauce.  This is a chicken chow mein FFS.”