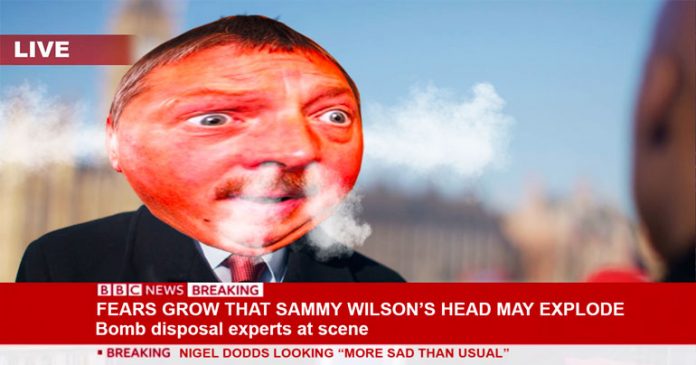 Emergency services have been called to the Houses of Parliament amid fears that East Antrim MP Sammy Wilson’s head may explode at any moment.

It is understood that Mr Wilson spent the afternoon giving news interviews about Boris Johnson’s proposed Brexit deal, and grew increasingly agitated as the day wore on.

“At first he was kinda half making sense,” we were told by one eye-witness. “Saying things about how the DUP couldn’t support this deal because whatever, but by the third or fourth interview he was beginning to lose it.”

“He kept shouting stuff like LUNDY! TRAITOR! and his face was getting redder and redder. Then his head started to swell up and steam began coming out of his ears.”

“Suddenly, someone yelled, ‘Get down! He’s gonna explode!’, and everyone ran for cover.”

Fortunately, Mr Wilson’s head failed to detonate, allowing police to throw a cordon round the MP and call in Army Technical Experts.

“It’s a very complex operation,” explained a bomb squad spokesman. “But we’ve managed to get the robot alongside him and a pair of snips inserted into his left ear.”

“Now we just have to work out whether to cut the red, white or blue wire.”