Boris to abseil down City Hall on designated flag days 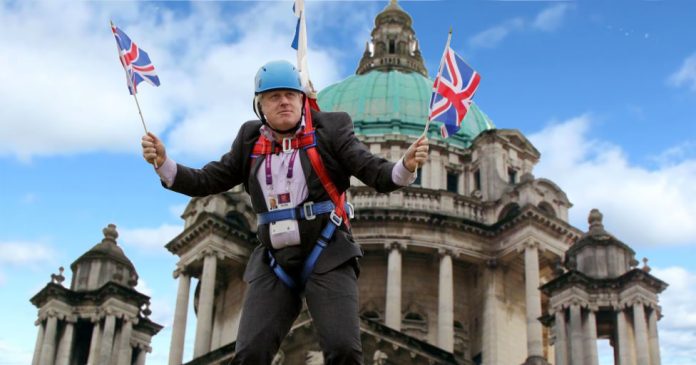 In a move that will undoubtedly anger nationalists, Boris Johnson has agreed to DUP demands to abseil down Belfast’s City Hall waving union jacks on designated flag days.

“I love getting high and where better to do it than right here in the heart of Belfast?” the PM told us.

“Also, I’m really looking forward to abseiling down City Hall with a couple of flegs” he added, as we caught up with him leaving Thomspon’s Garage at 3am.

The move is part of a new ‘confidence and supply’ agreement between the DUP and the Conservatives – and will replace the £1 billion financial settlement previously negotiated.

“As our hard Brexit stance shows we don’t really care about the economic prosperity of the country” explained a senior DUP source.  “As long as we feel a bit more British, and a bit less Irish, we’ll happily live with being poorer.”

“Well, we won’t to be fair. But the rest of you lot will” he laughed.

Other concessions include a new post-Brexit customs solution – which will see the controversial ‘backstop’ replaced with a brand new ‘Cullybackeystop’ instead.

“It’s quite simple really.” continued our source. “Goods will be re-routed through county Antrim for inspection. Then, if big Ian sees anything he likes, he’ll confiscate it – unless you sweeten him up with a lock of air-miles or a nice package holiday!”

Sinn Fein were unavailable for comment as they were busy doing something just as shady that they haven’t been caught for yet.

Share
Facebook
Twitter
Pinterest
WhatsApp
Previous articleNew NI Secretary to be “just as shit as the last one”, promises Boris
Next articleAll of NI roads to be dug up before end of school holidays, confirm Road Service