Brexit mess “unlikely to be redd up by Christmas,” admits Theresa May 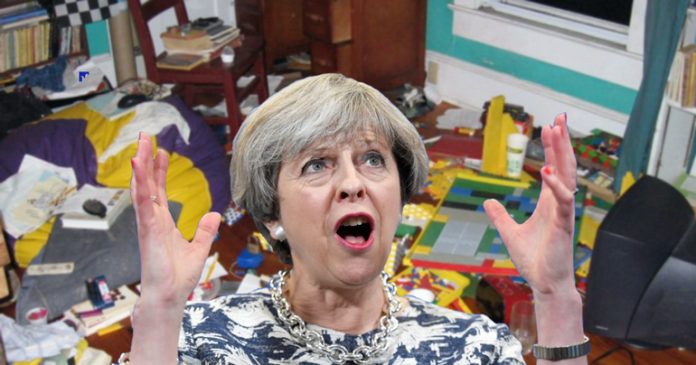 The Prime Minister is privately worried that she won’t be able to get the UK’s house in order in time for Christmas, The Ulster Fry has learned.

“The whole place is in shite,” she told us. “Every time I think I’m all set, a whole new pile of clabber seems to land down round me.”

The Prime Minister thought she “was motoring through it rightly”, only to find that the DUP had wrecked her plans.

“I taul the weans, ‘that’s us set now, time to get the tree up’, but the next thing Arlene throws her toys out of the pram and we’re back to square one.”

“Then wee Nicola starts up in Scotland and there’s a whole handlin’ in Westminster. My head’s turned, so it is.”

Critics of Mrs May feel that, despite her protests, she’d never even been close to being ready for Christmas.

“Basically her idea of getting redd up is to sweep all the shite under the carpet or hide it behind the sofa, and just hope no one notices,” said Uel Logg, an expert on the impact of Christmas on the UK constitution.

“But sooner or later it all reappears and you end up tripping and falling on your hole just when you least expect it.”

Despite this, the government is continuing to claim that the mess will be sorted in time for the festivities.

“Significant progress has been made towards reaching an agreement to begin discussions about talks which may lead to consideration being given to a meeting that may enable us to begin preparations for putting up the Christmas decorations, at some point in 2018” said a Downing Street spokesman.