“Pick your own Brexit” plan unveiled by British Government 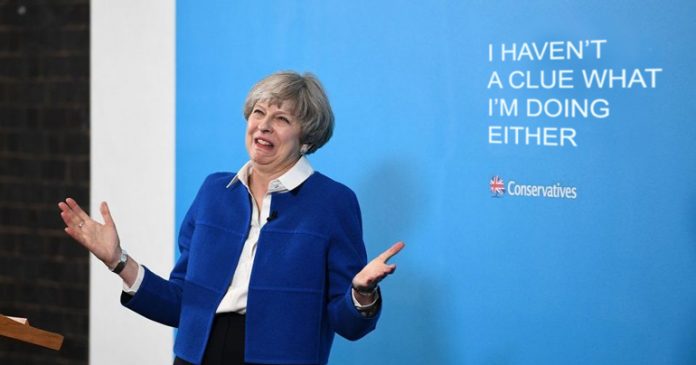 After seeing a plan that would see Northern Ireland remain in the Single Market shot down by the DUP, an exasperated Theresa May has tabled proposals that would allow everyone in the UK to choose their own individually tailored form of Brexit.

“The DUP want out of the Single Market, the SNP and the Mayor of London want in, so we’ll all just do our own thing,” Mrs May told our political reporter, Laura Kronenbourg, in a failed attempt to pretend that she was remotely in control of the situation.

The news was welcomed by East Antrim man Sammy Pilson, who told us he was introducing a really hard Brexit for his house on Trailcock Road, Carrickfergus. “It’s going to be the biggest, hardest, most magnificent Brexit in the world,” he gasped down the phone, “In fact I’m going to remove my house from the map of Europe entirely and draw a picture of it somewhere in North America, probably Texas.”

Fermanagh farmer Sean Deere was opting for a softer approach. “I’ve chosen number 43 on the list,” he revealed, “which appears to be limp Brexit with just a hint of border control, enough to make it worth while doing a wee bit of smuggling.”

Their decisions are being replicated elsewhere, with a patchwork of hard and soft borders being drawn up all across the UK, but the Prime Minister denied this was a climb down on her earlier commitments.

“I always said we were either better off in, or out, and that the way forward for this country is an ever closer distance from Europe,” she told our reporter.

We contacted the DUP for comment, but everyone at their party headquarters was too busy rolling around in a huge pile of shite of their own making.