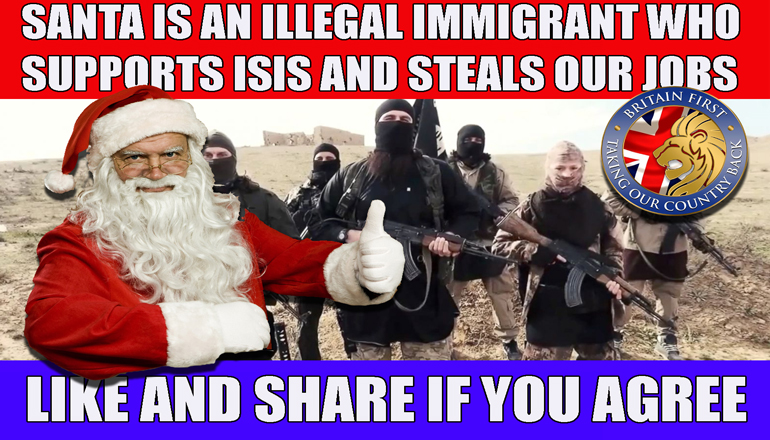 The far-right group Britain First has launched a controversial campaign to ban Santa, arguing that the red-faced mythical character is “part of the propaganda machine of radical Islam.”

The organisation has risen to prominence through a blend of street politics mixed with a populist social media presence that suggests its followers “Like and Share” images of war veterans, lollipop ladies and dishevelled dogs. However many people think that their demand that Santa should be prohibited from entering the UK might be a step too far, even for them. Britain First’s leader, Paul Ringpiece, disagrees.

“Santa Claus is one of the most notorious economic migrants on the planet,” he told us. “He’s originally from Turkey, moves through Europe, and ends up living at the North Pole. Despite this he comes to the UK every winter, probably because of the pensioner winter fuel payments.”

“Then he breezes into our supermarkets and shopping centres and sets up some kind of migrant camp he calls a grotto with a load of his elf mates. Having done that he just expects hard working parents to hand over proper British cash so that he can give their kids some kind of crap plastic tat made in China.”

We suggested that Santa’s mythical origins as an early Christian Saint made it unlikely that he would now be a supporter of Islamic State, but Mr Ringpiece was unrepentent. “He has a beard, a bag full of battery powered items and wears red all the time” he told us, “that’s all the proof I need that he’s a terrorist Muslim communist.”

Santa himself has denied the allegations, telling the Ulster Fry that he remained a North Pole national and only visited the UK briefly each winter.

“That said,” he concluded, “this is no more mental than anything else Britain First has come up with.”

At time of publication Britain First’s ‘Ban Santa’ image has been shared more than 20,000 times by their legion of Facebook idiots.