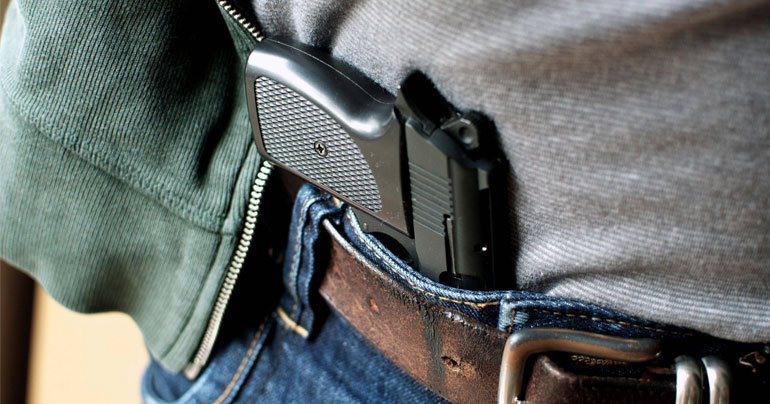 Following yesterday’s tragic shooting in Virginia in which two journalists were brutally gunned down by a crazed ex-colleague, the United States congress has finally bowed to pressure to rewrite the country’s gun laws.

“We’ve reviewed the evidence and taken everyones concerns onboard” said Senator Dick Ballzachki “and it’s clear that our nation needs stricter gun controls. So, as of Monday next week, it will be illegal to not carry a firearm in the United States”

The changes will be implemented at grass roots across the country’s educational system, starting at pre-school, where toddlers will be taught how to ensure the ‘safety’ is on when playing with guns. In high-schools meanwhile metal detectors will now be used make sure kids are not trying to sneak into school unarmed. Furthermore the popular practice of high-school gym wrestling is set to be replaced with the more modern ‘self-defence’ method of shooting the shit out of stuff.

The televised nature of last night’s dramatic shooting has also inspired TV drama producers to change their approach. “It’s clear we’ve been wasting our time firing blanks on set” said Terry Truckheimer. “From now on we’ll be using real bullets. They are cheap, freely available and the results speak for themselves! Plus it’s a lot more cost effective to pay a casting crew than for special effects, so it’s a win/win!”

However the impending law change has inadvertently spurned a type of gun crime which the US police have never seen before. “Yeah poorer folk are resorting to stealing guns to get compliant” admitted Sheriff Hat McCoy from Ohio “If they aren’t shoplifting them they are holding up stores with their hand shaped like a pistol to demand one. It’s very worrying. Imagine the carnage they could cause with a real gun!”

Meanwhile with the likely demise of the NI Executive and the recent paramilitary executions in Belfast, US Foreign Affairs are on high-alert to provide further Haas-style assistance to help. It is now expected that another rich diplomat will soon come to Ulster to teach us how to end violence in our society, treat people with respect and get along with our fellow man.