Channel 4 to add ‘Norn Iron week’ to Bake Off 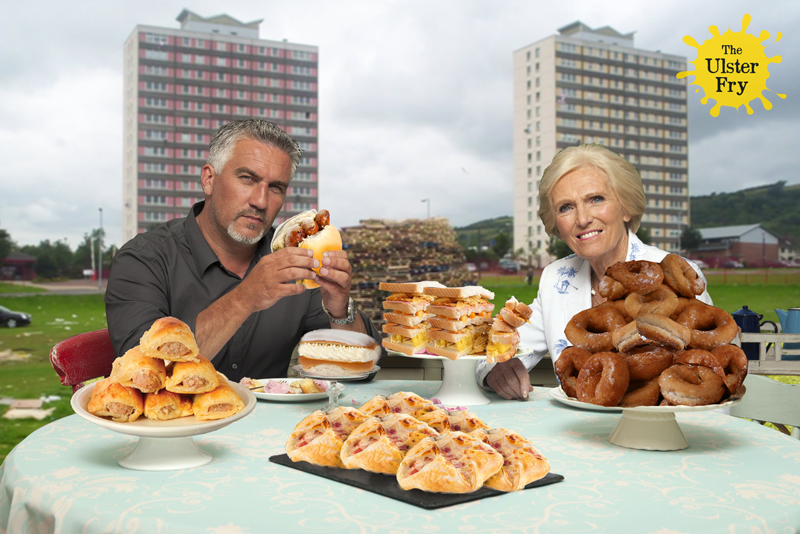 As the world recovers from the shock news that the Great British Bake Off is to move from the BBC to Channel 4, it has emerged that a key selling point was the addition of a Northern Ireland-themed week.

‘We wanted to move away from all that fancy muck like Chou Pastry and Fairy Cakes,” says show producer Carmel Square. “Yousuns over there are famous for your range of bakery stuff, so we thought we’d give it a ‘Viennese Whirl’, so to speak.”

Next year viewers will be treated to a full spread of Norn Iron products, with contestants expected to try their hands at everything from Sausage Roll Baps and Jambons to Fifteens and Paris Buns. “Hopefully Paul Hollywood and Mary Berry will come back,” says Carmel, “we might even persuade Paul to drop one L from his surname to fit in.”

“It’ll be great for innuendo. Plenty of banter about cream fingers and firm baps – I can’t wait to hear Paul complaining about someone’s soggy Fadge, or Mary giving off about a contestant’s deformed Gravy Ring.”

The producers have already carried out auditions for the show and are said to be delighted with the results, particularly the showstopper round.

“There was a triple decker crisp sandwich – alternating layers of Nutty Crust and Spicy Bikers,” says Carmel, “and an inside out pastie bap – a pastie carefully cut in half, with a slice of Veda inserted in between the slices.”

However the clear winner was a gigantic Rice Krispie Bun – six boxes of cereal mixed with molten chocolate and poured into a huge bun-paper made out of an old Belfast Telegraph. “Best use for the Tele I’ve seen in years,” Carmel explains, “beats reading it anyway.”

We contacted Channel 4 to see if any of this was true and they chewed our bake off.