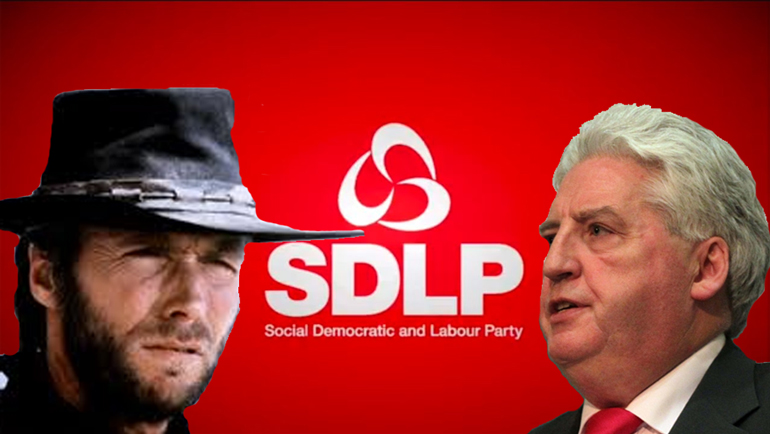 Hollywood legend Clint Eastwood has found himself at the centre of a dramatic identity mixup which will see the acclaimed actor and director sensationally contesting the leadership of the SDLP against the under-pressure Alasdair McDonnell.

The tale began yesterday morning at Dublin airport when, by some amazing coincidence, both Clint and his near namesake, Derry politician Colum Eastwood, flew into in the city. However it appears that duplicate name placards for ‘Mister C Eastwood’ led the men to inadvertently take on each others’ engagements for the day.

It is understood that the critically acclaimed film director thought that the seminar he was attending on the cross-border cattle trade was a rehearsal for his new political drama. “I just thought make-up department had outdone themselves” laughed the grizzled american. “I remember looking at Tom Hanks thinking ‘Jesus, he’s a pure spit for Pat Ramsey’ and then it hit me, it really is THE Pat Ramsey!”

Sinn Fein politicians have reacted with scorn, and are already digging up shady information from Clint’s colourful past in a bid to dissuade the nationalist electorate from backing the possible new leader. “We’ve found loads of footage of him working as a cop in the 70s” said a source. “Right bastard he was too. He was steady detaining people without proper evidence and his shoot to kill policy was f**king horrendous.”

Meanwhile Unionist politicians have uncovered other worrying issues. “We have been shown damning evidence that Mister Eastwood is a former prisoner” revealed Peter Robinson. “Not only has he served time in Alcatraz, but according to our source, he escaped and is still at large. We’ve got enough ex-prisoners here stirring the pot surely?”

Elsewhere, whilst Clint prepares his vision on how to take the SDLP into the future, Colum was unavailable for comment due to ongoing filming commitments.  “Aye he’s in New York directing some big blockbuster movie,” his PA told us. “He’s still has the party’s best interests at heart though – he’s only off the phone with Environment Minister Matt H Damon.”