Conor McGregor to fight in new season of Robot Wars 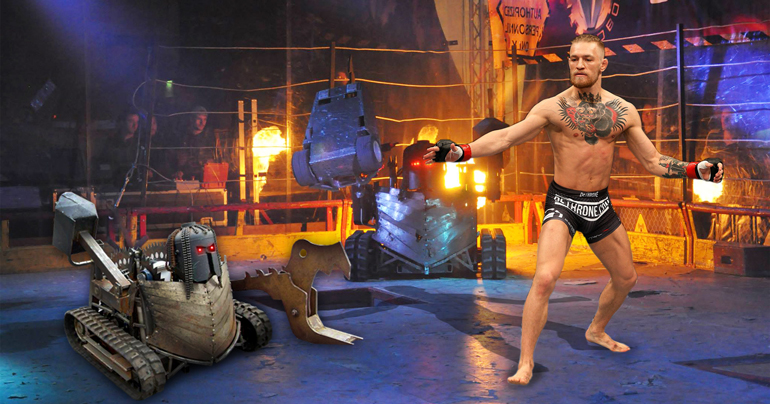 After announcing his intention to dominate multiple weight categories of the UFC – and then offering to fight Floyd Mayweather in a boxing match, Irish fighter Conor McGregor has revealed plans to compete in the new season of Robot Wars.

The BBC announced the return of the classic show earlier today, and McGregor’s team wasted no time in registering the Dubliner as a competitor. “Oi’ve defeated Jose Aldo in tuurteen seconds! And now even Maywedder is afeared of me.” said a defiant McGregor “Der’s no man dat can beat me, so it’s time to challenge meself against machines”

One potential stumbling block is McGregor’s insistence that all robots will enter the arena in a tiny pair of underpants, just like him. All the bots are thought to be against the plans, except for C-3PO from Star Wars, who reportedly thought it was ‘a fabulous idea’.

The Robot Wars championship purse of £10m would be McGregor’s biggest yet, but in one final twist producers revealed that the cash can only be obtained by fighting a new house robot in an epic finale. “It’s an evil ATM machine on wheels” revealed Hal Kubrick from the BBC. “People keep asking how we programmed it to be such a fierce adversary which refuses to give out money, but the truth is it’s just an ordinary cash machine from Ulster Bank”

The winner will go on to fight Darth Vader in an epic intergalactic showdown to determine if people are better than robots. However this drew complaints from several engineers who argued Mr Vader was born human.