Did James Nesbitt get a bum deal on his new hairdo? 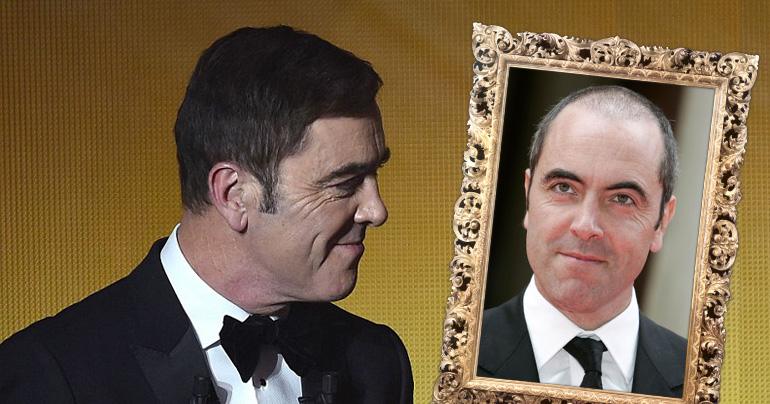 Football fans issued a red card to Northern Ireland’s James Nesbitt this morning, after the previously bald actor turned up to present FIFA’s Ballon d’Or award last night with what some onlookers described as a ‘wile mop of hair on him’.

Twitter erupted into predictable cruelty at the sight, as Nesbitt took to the stage looking considerably more windswept than was previously possible for the Coleraine man. Many pointed out that his hair now had far more hair in it, whilst others uncovered a conspiracy that suggested it may have magically changed colour.

Whilst obviously delighted with his new hairdo, it appears Hobbit actor James actually checked into hospital for a vasectomy before emerging with a new makeover. “He has told me he vanted to get gud snip” explained German surgeon, Hanz Helmut. “He tells me geting ready for big football show… and he love ze Barnet in England and really likes Herr Messi. So ve puts him to sleep and take many hairs from his hole.”

“He von’t be able to sit for weeks, but he looks sweet to ze beat!” he added.

“Fair f**ks to him” remarked Man United legend, Sir Bobby Charlton. “I wish I’d thought of that myself. I was combing six strands of wispy pish over my napper for years! Seriously, look at the cut of me!?”.

Current Man United star Wayne Rooney also offered advice for his fellow hair transplant recipient. “He just needs to be patient when styling it. It will take time for his best side to gel”

We considered writing more jokes about James’ new hair transplant, but we didn’t want to rip the arse out of it.