Crisis talks at Stormont after U2 threaten to play Belfast gigs 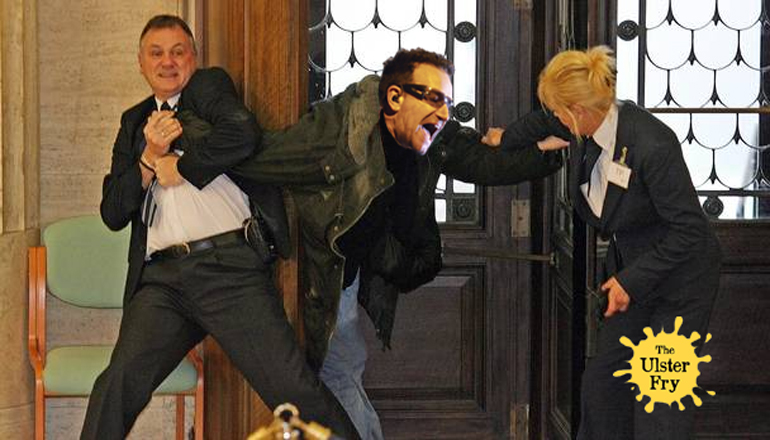 Northern Ireland’s main political parties have engaged in ‘crisis talks’ after it emerged that U2 are threatening to play two gigs in Belfast later this year.

The band, who are perhaps most famous for their hits Love Shack and Red Red Wine, are currently staying in the 8 Star Burj Al Arab Jumeirah Hotel in Dubai to promote their latest campaign to eradicate world poverty.  Announcing the dates, Bono told journalists “these Irish shows will be like an Irish wedding. It is always tricky planning a wedding,” which would seem to indicate that everyone will get blocked and fight with their relatives.

As the news broke there was an immediate thawing of political tensions with all parties appearing unanimous in their hatred for Bono. Ken Reid, the rubber faced political editor at UTV, told the Ulster Fry that “they can’t reach agreement on welfare reform or the current status of PIRA, but the mere thought of Bono singing in Belfast with that constipated expression on his face has got the politicians here working together again.”

Sinn Fein immediately voiced their disgust at the extortionate prices being quoted for tickets. Gerry Kelly remarked, “It’s a disgrace, that in these times of austerity people are being asked to pay up to £165. Some of my constituents are still using the iPhone 4 God love them! I hear the cheapest ticket is £35 and that only entitles you to park outside the stadium and listen to the concert on a car radio.”

Tree-hugging Green Party activist Steven Agnew has blasted Bono for his hypocritical stance on global warming, “He’s always banging on about the ice caps melting, yet I hear his sunglasses travel separately to and from gigs in a nuclear jet.”

Meanwhile, David Trimble has warned politicians off appearing in public with Bono – as he blames the Irish rock dwarf for ruining his political career. “I was leader of the largest unionist party in the country, they’d just asked me toss a coin with John Hume for a Nobel Prize, things were great. Then I appeared on stage with Bono and within a matter of months Ulster Unionist MPs were placed on an endangered species list. Now I’m cleaning toilets in Avoniel Leisure Centre.”

We tried contacting Bono for comment but an aide told us he’d popped out and was walking across a nearby lake to turn water into wine for guests at a local wedding.