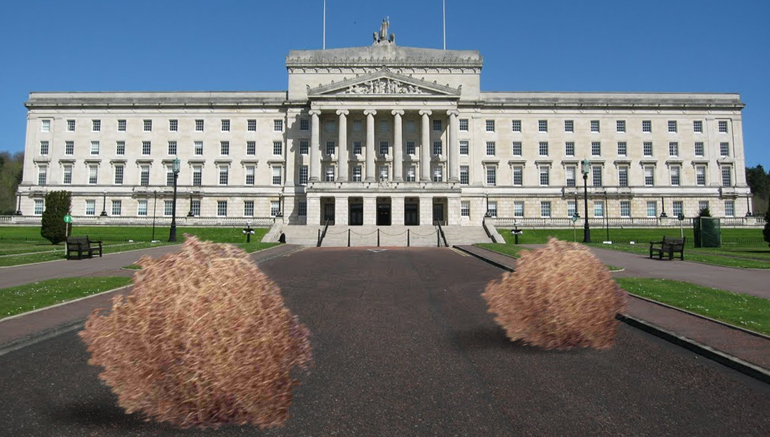 Thousands of people have taken to the streets of Northern Ireland this evening after it was announced that their beloved leader, Peter Robinson, had “stepped aside” as First Minister.

With Stormont on the brink of collapse, angry protests have been reported across the country. Nearly 50,000 disenchanted citizens have gathered at Parliament Buildings, begging Robinson to take up the reins of power once more, and continue to lead his Executive colleagues in the job they do so well. Meanwhile in Derry, a 24 year old man was taken into police custody ‘for his own safety’ after he attempted to set fire to himself in Guildhall Square. We sent our reporters out onto the streets to talk to members of the public, and were shocked at the level of sadness that we found.

“I can’t believe it,” said 32 year old nurse David Sharpe, “they were doing such a good job up there. I work in the Ulster Hospital, the waiting lists have been slashed and morale among the staff has never been higher. The mood now is one of utter despair.”

Local businesswoman Sonia Sanyo was similarly despondent. “In the business community we rely so heavily on our politicians for guidance,” she explained, “look how quickly they dealt with Corporation Tax, and how good they are at supporting small businesses. The rates on my shop have nearly doubled, but it would be so much worse if our politicians weren’t doing such an excellent job.”

“This is devastating news,” Antrim car salesman Gary Goodman told us. “As a Gay man I’m worried that there’ll be nobody in power who can randomly insult me and accuse me of being an abomination against nature. The Gay community needs that type of support.”

Pensioner Walter Toshiba was similarly distraught. “What upsets me is knowing that there was nothing more they could do and how hard they all work. We have the best politicians in the world, so honest and trustworthy, and they’ve achieved so much during their time in power.”

In another, possibly related, story ornithologists have announced that one of Northern Ireland’s rarest birds is now extinct. “It’s sad news,” said Sean Panasonic from the RSPB, “They used to be so common here, but no one has seen a Flying F**k in months.”

Don’t forget the Ulster Fryathlon is still raising money for Save the Children. Please give generously, it’s not as if you have to pay to read this crap, and we have prizes now and everything……