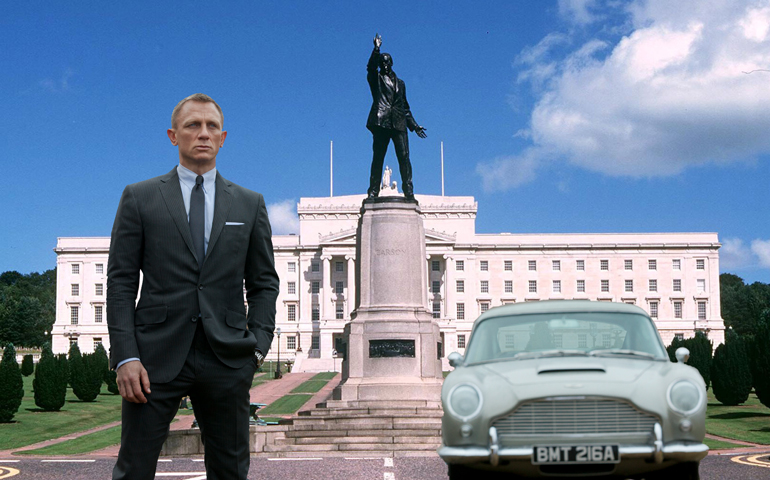 Heart throb actor Daniel Craig has stunned movie fans by turning down a reported £68 million deal to return as James Bond, so that he can take on the role of Justice Minister for the Stormont Executive.

In an exclusive interview with The Ulster Fry, Mr Craig said he had been following developments here with interest, and he’s ready to step in if the Alliance Party won’t take on the role.

“There’d be a few changes obviously,” he told us, “a lot less standing about talking, and a lot more running around fighting folk whilst only wearing pants.”

“Suffice to say I’ll be dishing more boots up the hole than you got from David Ford.”

The move would certainly shake up the administration of justice here, but Sinn Fein have been quick to condemn what they regard as ‘the interference of British securocrats.’

“Craig has clearly been operating a shoot to kill policy in his previous job,’ said North Belfast MLA Gerry Kelly, who has never seen a gun in his life. “We can’t have professional killers holding positions of power here, only amateur ones.”

The news leaves the Alliance Party in a difficult quandary. “They can either take the position themselves, or nominate one of their MLAs to be the next James Bond,” says political pundit Alexis Cane. “I can’t see Naomi Long in the role so that leaves Ford or Farry, though it’s hard to imagine either of those two emerging out of Belfast Lough in their Budgie Smugglers.”

Meanwhile Mr Craig has made a final pitch for the position, telling us that “It’s either me or that wee Fecker Steven Agnew.”

“He’d have youse all riding bikes to work, but I prefer doing my riding in work,” he concluded, before shouting yeoooooo and leaping out of the window.