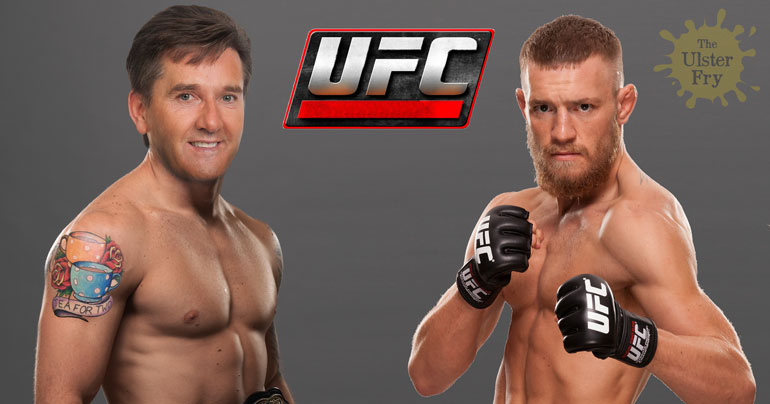 Within hours of agreeing to appear on Strictly Come Dancing, it has been confirmed that Donegal superstar Daniel O’Donnell will also be fighting in the UFC later this year, squaring off against fellow Irish legend, Conor McGregor.

“Well, god bless us and save us I was just getting wile excited about showing off my line-dancing skills across the water when the phone rang and it was Conor looking for a scrap. Auch sure it was like Christmas and Easter all at once! Majella god love her is worried sick. She’s always teasing me that she thinks he’s handsome and sure she knows I’ll leave him in wile shape altogether!”

O’Donnell a long time student of mixed-martial arts, famously commissioned a hexagon-shaped animal enclosure at his lavish country estate which, when not being used to round up livestock, doubles as a UFC training facility. “Oh god, there’s been many a head busted in that yoke” admitted O’Donnell. “There’s no better man for handing out a beating in this neck of the woods. Sure it’s wile craic altogether and great for the stress.”

Daniel has already begun his training and will mix his fight preparation with his BBC dancing commitments. “Sure you’ve got to get your body and mind right for a big fight. I’ll be cutting back on the teacakes, mikado biscuits and the coca cola, and switching to good healthy stuff like wheaten bread, soda farls and McDaid’s football special.”

The Kincasslagh man revealed that his late mum never understood his love for full-contact martial arts. “My wee mammy never got the whole UFC thing. She’d be beside herself at the thought of me fighting McGregor in Vegas.”

“She taught me how to box after all” he revealed. “She always wanted to see me fight Floyd Mayweather!”