NI tourism booming after most successful bonfire season ever 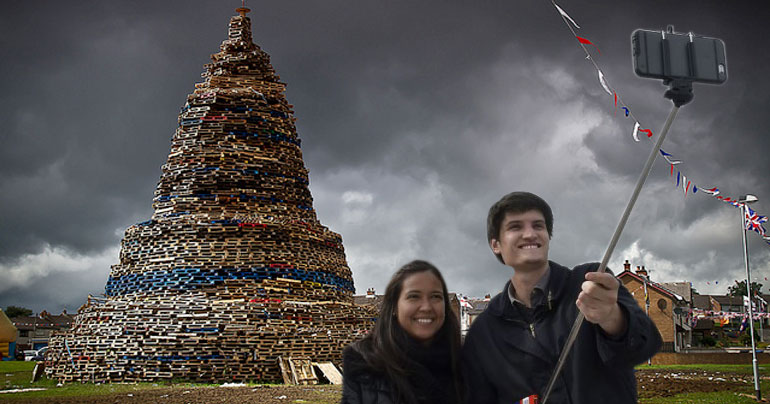 Whilst NI’s communities bicker and burn each others flags, the real winner of Ulster’s bonfire season is the local economy, which continues to flourish as tourists flock to Northern Ireland to enjoy the summer festivities.

Sandra Peters of Tourism NI told us “Bonfires often get a hard time but people need to remember that they bring millions into our economy. When folk from other countries see our huge bonfires online their next step is usually to book a direct flight to Belfast! Our troubled past is our unique selling point. We risk huge job losses if we make our future too shared!”

Bonfires have received some negative press recently as our habit of triumphantly burning each others symbolism hit the news. However rarely does the positive side of bonfire culture make the headlines. “Two communities not getting along show that we are a strong-willed and independent workforce!” said Tim Greenfield from InvestNI. “It’s probably the number one reason that global companies locate here. In fact we often show YouTube videos of the 11th night celebrations on trade missions. Nothing impresses an investor like a 100ft blaze in the middle of a housing estate!”

Local tourism got a further boost this week when a British poppy symbol was burned on a republican bonfire in Derry – whilst there was renewed controversy over a loyalist bonfire in Antrim. The two entirely different situations were criticised by members of opposing communities, who each took the opportunity to fight fire-with-fire, by pointing out how bigoted the other was by saying more bigoted stuff in reply.

There is also the unspoken effect of bonfire season on local employment statistics. “People don’t realise how many of our master bonfire builders have gone onto great careers in architecture” explained Terry Quinn from the Belfast Institute for Culture & Arson. “Two of the lads who built last year’s Rathcoole boney are out in Dubai now designing skyscrapers, and its common knowledge that the Shard in London was created by the fella who made the 2008 Newtownards Road bonfire.”

These factors, in combination with marching disputes, riots and the brutal murder of Kevin McGuigan in the Short Strand last week, made 2015 one of the best summers in recent history for promoting local tourism. “Regular criminal activity and murders do the image of ‘Brand NI’ no harm at all.” said Margret Kershaw from the Department of Trade and Investment. “If anything they give the outside world the confidence that we are consistent and enjoy routine! All important qualities for potential investors.”

“God spares us, if enough people lose their lives we might even get another season of ‘Give My Head Peace'” she added.