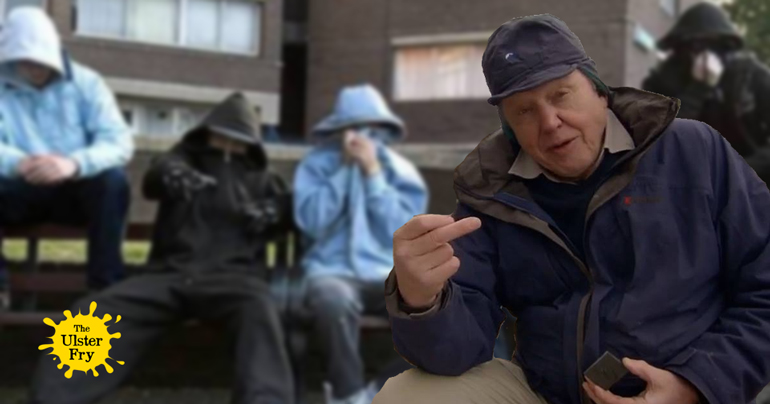 Following the success of Planet Earth II, naturalist David Attenborough has decided to update his Blue Planet series by visiting one of the most inhospitable places on earth – Northern Ireland.

Billed as the television event of the year, Blue Bag Planet will follow an indigenous species known as the Funnel Drinking Spide as it crosses treacherous mud plains in Mallusk and Magherafelt to reach the car parks of Cookstown and Carryduff, foraging for chips and Buckfast to sustain the herd.

BBC NI spokesman Colin Glen told us “The Funnel Drinking Spides are fascinating but we don’t know much about them, as their aggressive nature makes it nearly impossible to get close without getting a boot up the hole and all your camera equipment nicked.”

“Should David get among them, it’ll make mucking around on the jungle floor with gorillas look like a day collecting butterflies at Antrim Road Waterworks.”

The crew are also hoping to get a glimpse of an even rarer beast, the Spide’s mate – the lesser-spotted Millie.

“Naturally nocturnal and masters of camouflage, Millies blend into the background at the first sign of trouble,” Colin explained. “However, they can be brash and loud if provoked. Spotting one is a possibility, what with all the new technology and alcoholic beverages at our disposal. We plan to entice them into the open by leaving bottles of WKD Blue near our hide.”

“The ultimate would be to capture their notorious mating ritual, described as one of the most savage acts in the natural world. It usually takes place following a late-night illegal rave on the outskirts of Dunmurry and afterwards she eats him.”

The documentary makers are understood to want filming to start as soon as possible, before the Spides and Millies move south to Millisle for the winter.