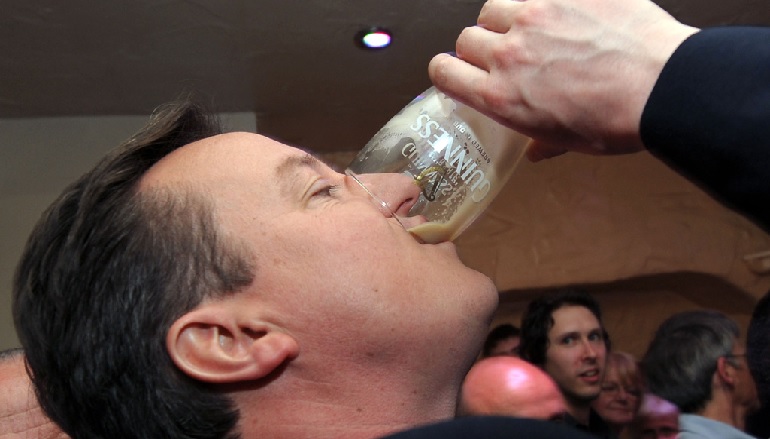 UK Prime Minister David Cameron has thrown down the gauntlet to his political rivals by agreeing to take part in a televised debate but “only if we do it in the pub.”

The Tory leader made the offer as he emerged from the Dundonald branch of Winemark, clutching a bag containing a half bottle of Vladivar and 4 bottles of Blue WKD. “Everyone needs a mixer,” he explained.

The offer was met with an mixed response from the other party leaders. Speaking at the opening of a pub in Bristol, Labour’s Ed/David Miliband told waiting press that he was “well up for it”, before singling out one reporter and saying “See me? See yer ma? Yeooooooo!!!” UKIP’s Nigel Farage also backed the proposal, “so long as we’re not drinking any of that foreign muck.” However Lib Dem Leader Nick Clegg was less keen. “I’ll have to check at home first,” he told us, “It depends what’s on television, and if Miriam lets me go out.”

The leaders of the smaller parties were more enthusiastic. “Bring it f**king oannnnn!” tweeted the SNP leader Nicola Sturgeon, “I’ll f**king hiv yissss”, whilst that woman who leads the Greens responded, “Did you hear me on the radio the other day? I was clean wrote aff so I was. This’ll be a piece of pish.” We didn’t ask the leader of Welsh nationalists, Plaid Cymru, as we don’t know who he or she is and couldn’t be arsed looking it up.

When contacted, a spokesman for the BBC denied there was any truth in the rumour, going so far as to claim that we were making it all up. “It does seem like a good idea though,” he admitted, “at least it would stop the DUP moaning about trying to get on.”