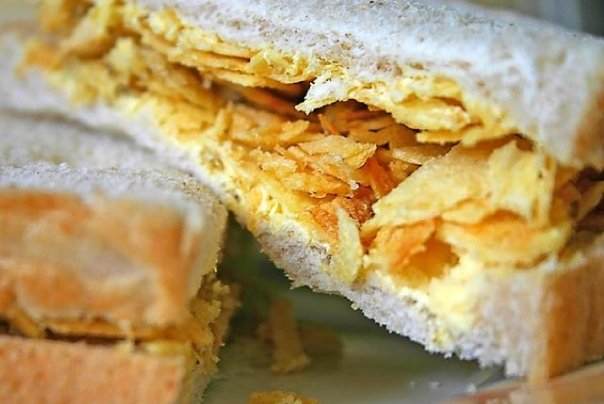 Disciples of the hallowed Crisp Sandwich have spoken of their ‘pure torture’ during the 40 days of Lent, after giving up something they love until Easter.

Andrew McMenamin from Simply Crispy, the world’s first Crisp Sandwich cafe told us “Yeah you can see the pain on many customers faces, as we butter crusty bread and then heap them with delicious crisps – for friends who don’t take part in Lent, right in front of them.”

We asked some of those abstaining why they chose to give up something they love, at a time when the Crisp Sandwich has become the must-have trendy lunch option in the heart of Belfast.

“Well. we have been coming here for weeks on end – ever since it opened!” said a group of students from Belfast Institute “But our teachers keep banging on about the health risk of regularly of putting something so high in fat and cholesterol into bread every day – so in the end, we decided we’d give it a break til Easter!”

Just then, an order arrived for the group consisting of six crisp sandwiches and two Belfast baps – all filled with various crisps and corn snacks. Tucking into one of the massive oversized rolls, as bits of Bikers flaked down his school tie, group spokesman Denzel McGookin told us.

“Aye, its just the not same, but we’ll struggle through. Sure its only another 4-5 weeks and then we’ll be able to get back normal lunches – AND chocolate eggs for dessert!”

Confused, we enquired why they had ordered a huge table full of crisp sarnies if they were off them.

“Naw, we’re not off crisps ya madman. We’re off butter! Love it, but its wile bad for you apparently. It’s margarine all the way for us! he added, as the group grimly nodded and made the most of getting through Lent together.

Simply Crispy is still open on Bedford Street and McMenamin said “real butter is still available” for those who “wish to live dangerously and defy the Gods”.