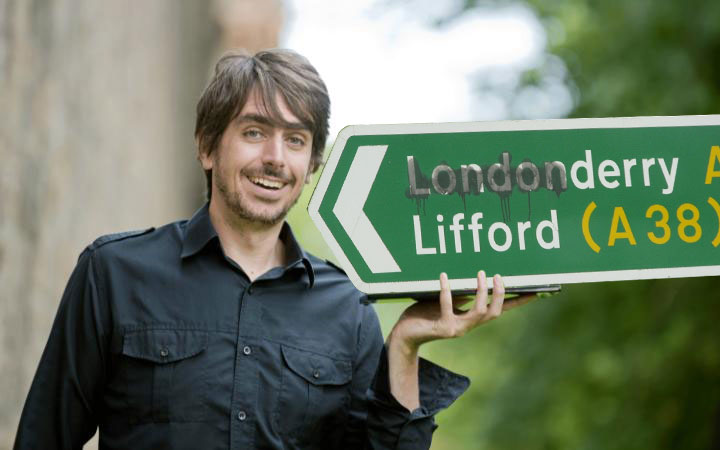 A Belfast man who made an original, witty retort to some people he’d never met before, has won the Best Joke award at this years Edinburgh Fringe Festival.

Lee Robinson from Belfast told us “I was in Edinburgh for the weekend with the missus when we bumped into a group of lads from up the country. We got chatting and I asked them where they were from. One said he was from Dungiven, another from Strabane and the last fella said ‘Derry’.”

“Just then I had a flash of inspiration. I thought to myself, jaysus, I can make my response, educational, historically relevant, patronising and hilarious… all at the same time. And then out of nowhere, I just blurted out… ‘Don’t you mean Londonderry?’ …. It was pure class. Everyone fell about laughing, it wasn’t awkward in the slightest and I didn’t come across as passive aggressive sectarian douchebag, or anything! ”

The joke beat off tough competition from an assortment of other cracking one liners including, ‘Did you do that wanking?’ in response to a man wearing a bandage on his arm, “Oh, watch out for the Lady Boys” to a punter who was headed to Thailand on his honeymoon, and a man who said “It’s a great day for ducks” after it started raining.

“It’s been the most original and witty selection of ad lib comedy we’ve ever seen here at the festival. Those responsible should be proud of themselves!” said a spokesman. However the comedian behind the second placed joke, “Don’t you mean Derry?” has formally complained to festival organisers about being overlooked for someone from Belfast.

Meanwhile a group of local women who cut their hair to compete in the Fringe Festival have given the experience an extremely bad review on TripAdvisor. “Load of shite” said Imelda Wigwam. “Not one person even approached us about our lovely new hair-dos!”