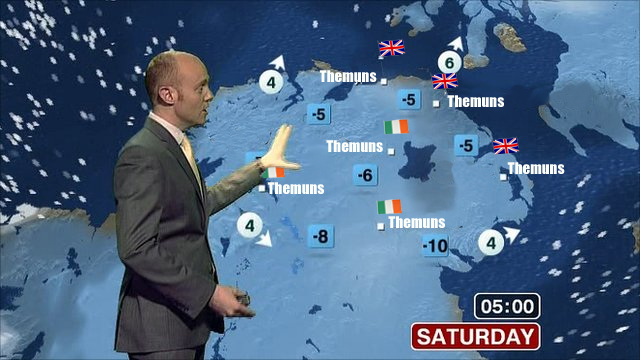 Stormont witnessed extraordinary scenes yesterday, as a heated debate developed over the religious make-up of the towns which feature on local television weather reports.

The argument began after Sinn Fein MLA Aimsir Fliuch asked Culture Minister Carál Ní Chuilín if her department would introduce legislation to ensure that Irish language place names could be added to the BBC weather map.

According to Ms Fliuch, her constituents in West Tyrone couldn’t adequately prepare for the day’s weather as they were baffled by the names of foreign sounding places like Omagh and Strabane. “How are you supposed to know if you need a coat if you can’t tell where you are?” she demanded, before tweeting her followers to prove that she actually did something the odd time.

When the Minister replied that she would raise the matter in the Executive, there was an angry response from DUP North Antrim MLA Gusty Day. “My staff and I have been recording which towns are used on TV weather maps,” he claimed, brandishing a sheet of A4 paper, “and this graph proves that no less than 64% of those towns are Catholic towns, some of them are even in the Free State. Where is the parity of esteem here?”

As a result of the debate BBC NI and UTV executives have this morning agreed to select the religion of places for their maps on a strictly 50/50 basis in future, and to have all place names in English, Irish and Ulster Scots.

Likewise Frank Mitchell will ensure that his weather watching camera includes flags and murals of different persuasions on alternate days. He has also asked viewers to include the religious origins of children when they write in asking for birthday greetings in order to ensure they don’t accidentally end up on the same segment.

The maps will be overseen by the newly created Parity of Televisual Weather Output Commissioner, who will be paid from the education budget.