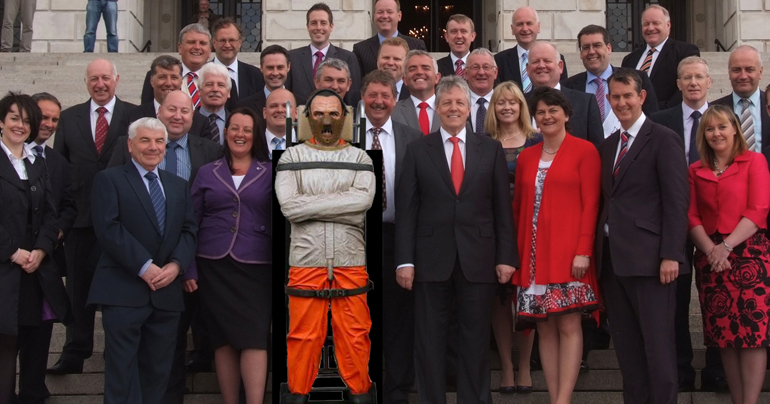 DUP leader Peter Robinson announced a major reshuffle of his ministerial team today, in what he described as a bid to “find the right people with the right skills for the job.”

In a headline grabbing move, Mr Robinson has appointed Dr Hannibal Lecter as the new Minister for Health, highlighting the fictional cannibal’s impressive medical credentials as his main motivation for the appointment. “Dr Lecter has spent a huge amount of time in different health institutions, both in a professional and an advisory capacity, I don’t know why we didn’t think of him before.”

Dr Lecter has had a relatively low profile as an East Antrim MLA, but is known as a moderate within the party. His appointment follows a number of scandals involving previous Health Minsiters, with both Jim Wells and Edwin Poots finding themselves involved in allegations of homophobia. According to our DUP insider, in Dr Lecter the party believe they have a “safe pair of hands who’ll avoid any controversy.”

Speaking outside his Larne home, the new Minister told reporters that he was keen to get to grips with the problems facing the Health Service. “I’m really looking forward to getting my teeth into the job,” he told reporters, “I’m making waiting lists my number one priority and I already have some mouthwatering new ideas on how to dramatically reduce hospital queues across Northern Ireland.”

As part of his post election reshuffle the First Minister has also appointed suitably qualified fictional characters to two other departments. From tomorrow, Captain James T Kirk will take the helm at the Dept of Enterprise, whilst the Count from Sesame Street will become Minister for Finance and Personnel.

Both are said to be “relishing the opportunity”, with the Count declaring that there would “one, two, three thousand civil servants” made redundant within the next few months, before laughing manically as thunder clapped in the background.