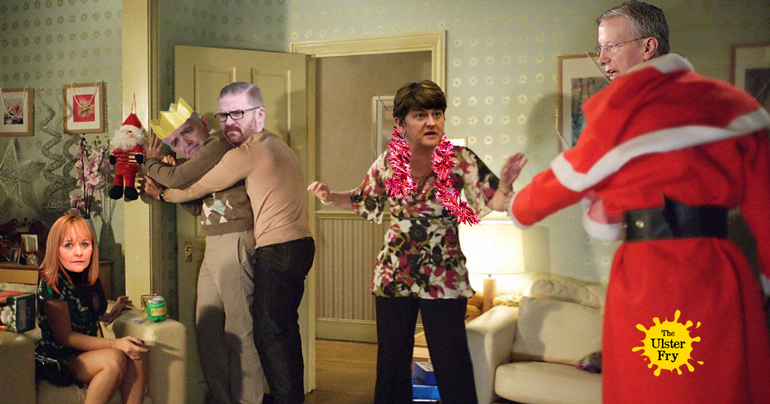 The annual DUP Christmas celebration is “gonna be an epic shitstorm”, a panel of observers from the National Fly on the Wall Institute has declared.

“Cannae wait,” was the gleeful reaction of Lou Bottle, who has been hovering around Arlene Foster’s office for the last three days.

“She’s clean rippin’,” she told us, “and big Doddsy is in even worse form. He keeps going on about how it’s a witch hunt against Arlene, which isn’t a great analogy in the circumstances. They used to burn witches didn’t they? Nowadays you’d probably get a huge grant to pay for the kindling.”

Her colleague Moss Quito has been biting Jonathan Bell this week, and told us that the former minister was in a bad way. “Poor Jonny, it’s like getting blood from a stone. He’s just sitting there, looking like a depressed puppy and mumbling quotes from ‘Dr’ Paisley. It’s really not like the DUP to air their dirty linen in public, is it? They usually turn the heating on full blast and hang it over the radiators.”

A DUP spokesman denied that there was any rift in the party, and claimed that their annual Christmas do would be a “roaring success.”

“We’ve all the usual games lined up,” he revealed. “We’ve got Pin the Blame on the Civil Servant, Political Charades, Untruth or Dare and Hunt the Trimble. There’s even a Feñiata – which is like a Piñata except we hit one of the o’er surt with sticks.”

We tried to get a response from all the other political parties but they were all too busy rubbing their hands with glee.