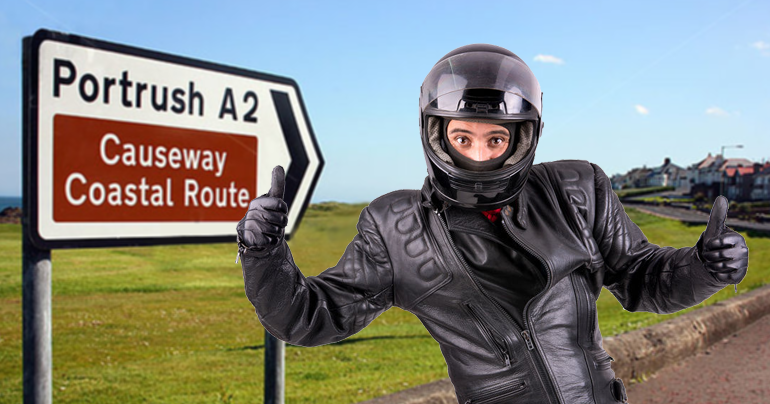 There was anger amongst local homophobes today, as thousands of men dressed in skin-tight leather outfits descended upon Portrush to shove motorised contraptions between their arse cheeks and chase each other around the town.

“We cannot stand idly by whilst our beautiful north coast is overrun by leather-clad men drinking beer and admiring each other helmets!” said DUP spokesman, Abraham Sammich. “It’s an absolute outrage… especially as they are also doing it on Sunday!”

“This festival of sodomy an affront to the life of Jesus!” agreed Psalm Uel Jackson from the Mid-Ulster Church of Eternal Damnation. “And to the memories of Peter, Paul, John, Matthew and all the other grown men he spent his days hanging around with!”

Intrigued, we travelled to Portrush to witness the sordid debauchery for ourselves.

“The town is filled with hairy men desperately trying to make a pass at each other” revealed full-time eye-witness, Rosey Parker.  “Some of them must swing both ways too, cos they’re trying it on the straights and the bends.”

Neighbour Ella Toupe agreed. “It doesn’t take a genius to figure out what is going on here. Grown men pitching tents in strangers back yards… the smell of lubricant and burning rubber in the air, we’re not stupid ye know!”

A spokesman for the Ulster Fry has confirmed that they have now run out of homoerotic biker innuendo, but that readers were welcome to join in below.