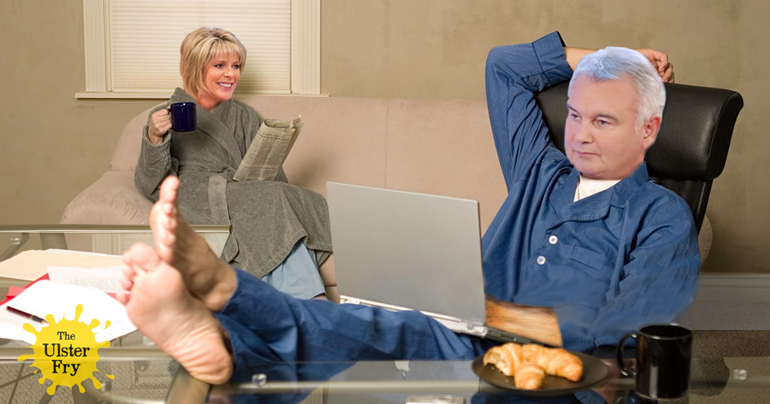 Following today’s shock announcement that Eamonn Holmes is leaving Sky News, the Ulster Fry has learned that he’s sensationally set to continue his breakfast news dynasty, except at home, over breakfast.

“I can’t be arsed doing thon London commute at the skrake of dawn anymore”  he told us. “It’s a right pain in the hole so it is. It wouldn’t be so bad if ye could get a decent jambon or a 5-piece fry, but the petrol stations here are pure dung! I’m feckin scunnered with it.”

“From now on I’m just going to work from home!” he declared.

‘Breakfast at Holmes’ will begin in October, going out every weekday morning sometime between 7.15am – 8.00am, depending on how many times Eamonn snoozes his alarm.

“I want to bring a truly authentic breakfast television experience to the British public” he told us. “It will just be me, in my jammies, eating a bowl of Frosties, scrolling through my phone and reading out stuff from my newsfeed that catches my eye.”

The show will be broken into several segments according to Holmes, creating what he calls ‘an organic breakfast television experience’.

“Aye I’ll do the first segment just sitting propped up in bed with an extra pillow” he explained.  “I’ll just be rubbing sleep out of my eyes and catching up on all the Facebook posts I missed overnight.  Then later, I’ll move down to the living room to review the morning papers and eat a lock of toast”

However it’s the new weather format that is really set to revolutionise broadcasting.  Gone will be the typical glamorous weather girl, to be replaced by a more streamlined and cost effective meteorological practice.

“Aye I’m just going to look out the windy every half hour!”  he exclaimed.  “She’s fair brightening up now bai!”