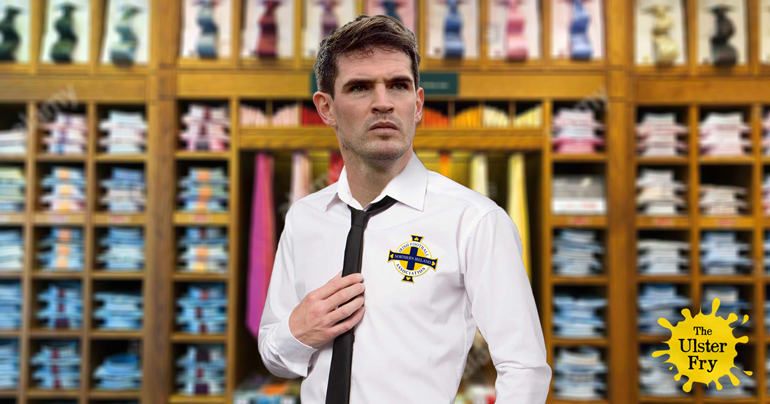 With Euro 2016 just days away, the IFA have dealt Northern Ireland fans a huge blow by announcing they mistakenly requested a consignment of wrinkle-free formal shirts instead of the team’s official football jersey.

“Due to a communication mixup when ordering we’ve received a container of ‘Non Iron’ shirts instead.” explained IFA Chief Executive Patrick Nelson earlier. “The guys at Adidas are extremely apologetic, but it’s too late to change it now, so we’ll have to make do.”

“Seems asking Germans for ‘Norn Iron shirts’ in a Belfast accent is a recipe for disaster” he added.

Both the players and fans are now resigned to making the best of the situation. The IFA called in the services of grannies across NI, who stayed up all night sewing NI badges onto the shirts in time for the tournament.

“I got mine this morning” said Hans Kerchief from Bangor. “and whilst it isn’t quite what I hoped to be wearing to cheer the lads on, the fact I didn’t have to iron it was a real bonus.  Plus I can wear it into work or a swanky restaurant and no one bats an eye lid!”

Michael O’Neill now faces a huge selection headache ahead of the opening game against Poland. “I can’t decide between the light-blue pin stripe with the double cuff, or the plain white slim-fit with button down collar” he told us.

“The lads are taking it well though” he continued. “They tried them on earlier and they were roaring with laughter.  Ye might even say they were in creases about it, but the truth it didn’t take a wrinkle out of them”

The IFA now plan to take advantage of the new formal attire to their advantage. “We’re insisting the team wears a neck accompaniment with two embroidered photos of our home ground on it” continued Nelson.

“So, a home tie?” we asked, anticipating a punchline.

“No” he answered. “a double Windsor!”