Bus horror as woman injured by 5A Shades of Grey 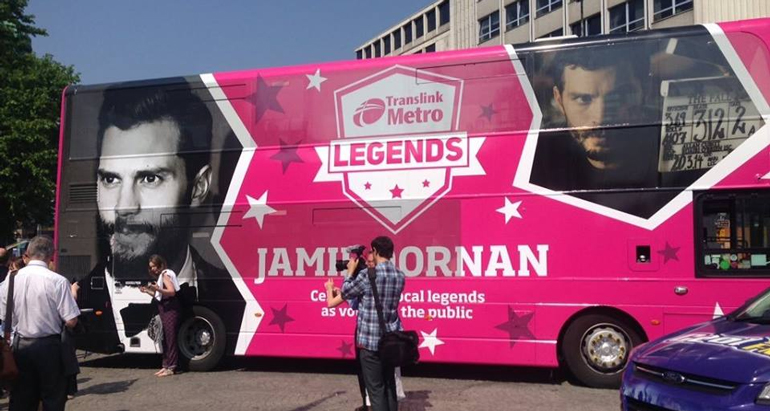 Great Victoria Street was brought to a halt today as Translink unveiled a new bus decorated with the big beardy face of Jamie Dornan.

Within minutes of the news leaking on social media, hundreds of sweaty and excitable women had rushed to Glengall Street, each one hoping to be the first to get a ride on the Holywood heartthrob.

The excitement soon turned to horror when one entranced woman was knocked unconscious as the bus pulled into the stand. “When I heard I might be able to sit on Jamie’s face, I was down here like a shot,” said 26-year-old Giza Coort from Gilnahirk, from her hospital bed. “I probably won’t be able to walk for a month, but to be fair that’s what I was hoping for.”

The transport company ran a consultation last month which gave the public a choice between Jamie Dornan and some other local legends, probably including Jimmy Cricket, May McFettridge and Jim Megaw from the Crazy Prices adverts. Ulster Rugby star Rory Best also features on the Dornan bus but hasn’t attracted so much attention, with Belfast women vastly preferring to mount Jamie’s top deck.

However not everyone was pleased with their experience. “I was disappointed to be honest,” said Antrim Road woman Wanda Buck. “For a start I didn’t expect it to be such a bumpy ride, and then it took hours to get anywhere. Finally it broke down on the outer ring and I had to get myself home.”