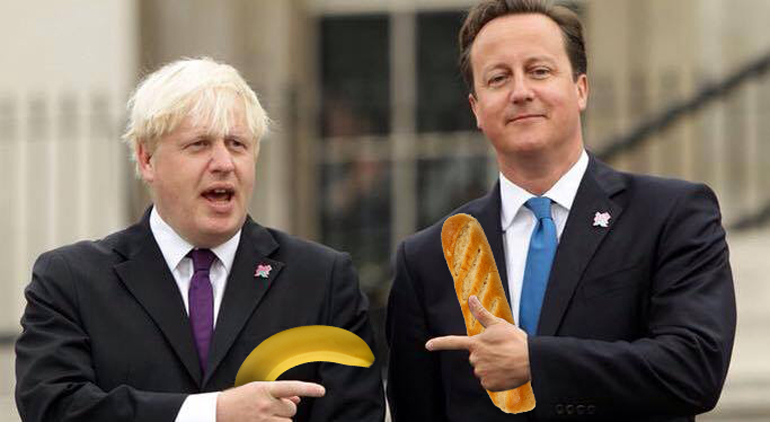 A staggering 84% of stuff said in the so-called Brexit debate is bollocks made up by people who you wouldn’t trust to look after your cat, The Ulster Fry can reveal.

Tony Blair and John Major fly into Northern Ireland today to bolster support for the remain camp, having apparently forgotten that no one really likes them very much.

“Look,” Mr Blair told us, “I know you don’t, you know, believe me about the whole weapons of mass destruction craic, but I can feel the hand of history on my shoulder and, you know, the EU really is the people’s EU.” Meanwhile Mr Major hopes we’ll all forget that he bucked that Edwina Currie and try to take him seriously.

On the Leave side rubber faced smug bastard Michael Gove has been attempting to persuade us that all the money we currently send to the EU would be spent on good things if we left. “We give the EU £350 billion every five hours,” he explains. “If we, the right wing of the Tory Party, got our hands on that money we’d spend it all on schools, hospitals, puppies and cider. Honest.”

Both sides also have really popular celebrities backing their campaigns. The remain side have actors Jude Law and Brian Blessed whilst Brexiters can call on the talents of Bucks Fizz and Have I Got News For You presenter Boris Johnston. Experts are concerned this will make the choice extremely difficult for people who make decisions based on the opinions of celebrities.

However in Northern Ireland the choice becomes even more difficult – with voters offered the chance to either agree with Sammy Wilson and Jim Wells, or listen to the words of wisdom from Mike Nesbitt and Gerry Adams.

A late campaign to add a third option in the referendum –  ‘Give everyone involved a boot up the hole’ – is gaining widespread support.