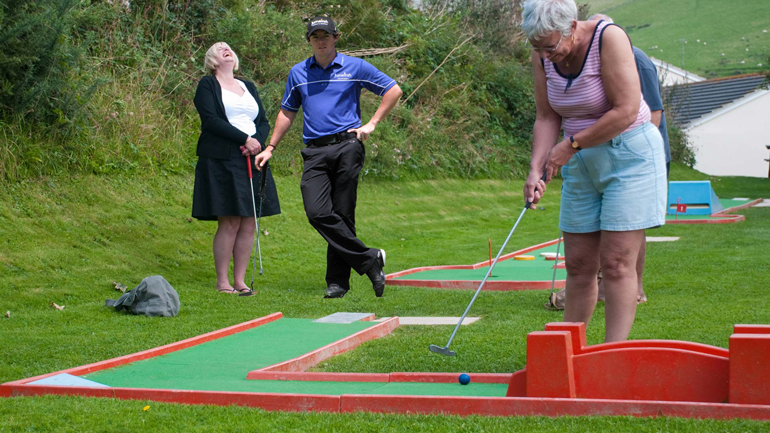 With the Irish Open underway at Royal County Down, golfing commentators across the globe have been stunned by the sudden expertise that local people have developed in the sport.

“I’ve been following the golf since the 1970s,” said 65 year old dinner lady Agnes Palmer, “it’s fascinating to watch those young men as they line up their shots. My favourite was Alex Higgins, but he’s dead now, so I tend to follow Andy Murray.”

“I’m not normally a betting man,” said a man we met in the bookies, “just the odd horse, maybe a flutter on the football, or the occasional egg and spoon race on school sport’s day, but I’ve been studying the form of these golfing fellas and have stuck the wife’s savings on that Australian boy, Eric Eels.”

Fellow punter Nicholas Jack had decided to back one of the local contingent. “I considered yer man the American fella from Portrush, and that other stout fella that drinks Guinness, but it’s hard to see past McIlroy. The way his golf career has flourished after that disastrous period managing the Northern Ireland football team is just remarkable.”

It’s not just bookies that are getting a turn from the sudden interest in the sport. Classified’s website ‘Gumtree’ reported a record number of people searching for and buying golf stuff.  “Aye, I got a Tyre Iron for a 1.9 TDI Sport yesterday” said sports enthusiast Barry Faldo. “Couldn’t believe the deal I got on it, was one of them fancy German brands too. Can’t wait to get down to the shooting green tomorrow to hit a few home-runs!”

However some avid fans bought the entire golf package. “Aye I was googling for tips on how to drive further in your golf and lots of folk recommended the 1.9 Diesel, 2009, so I went for that.” said budding golfer, Norman Gregg  “I’ve a fella arriving any minute from Magharafelt to start my training. He wants £5k like, in cash, but when you see how much Graeme McIllroy is earning, sure it’s money well spent.”

As the first day of the Open came to a close, local life-long golf fans were ‘delighted’ to read somewhere or other that local hero Ruari McEvoy was 9 over. “Just goes to show how lethal he is” tweeted Dee Westwood from Lisburn. “Most of them other boys are in negative figures!”