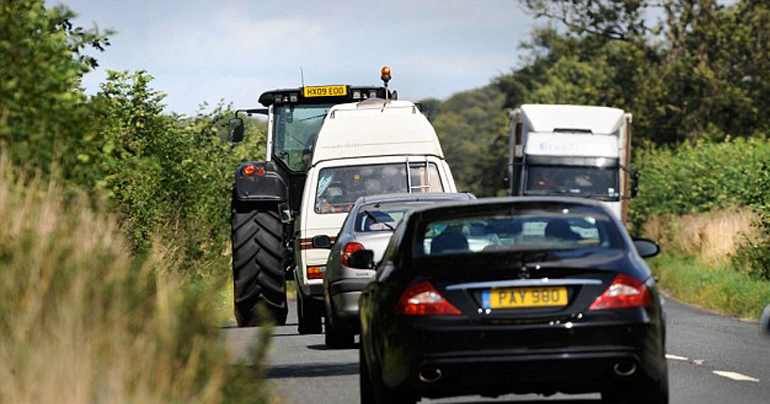 Civil servants at Stormont have raised the national tractor speed limit to 25 mph after a Co Down farmer stunned the agricultural community by setting a new world record for the number of cars stuck behind a tractor.

It is understood that 58-year-old Moneyslane man Wilbert Campbell managed to get nearly 1000 vehicles queued behind him whilst on a run in his Massey between Dromara and Rathfriland.

Mr Campbell takes up the story. “I was at a loose end and running low on baler twine, so decided to head into town. I got the yoke out of the shade and stuck the dog and a bucket into the link box and away I went.”

“After a mile or two I realised there was a quare rake of motors behind me, so adopted a more random driving technique to see what the crack would be. I weaved about in the road and stopped indicating, not that the signals work anyhow, and got the dog to leap out and bark when folk tried to pass.”

“Soon there was hundreds of them, you could have heard the horns in Ballynahinch, but I let on to be hard of hearing and just waved.”

NASA then became involved, as Kurt Wankelshaft from the Kennedy Space Centre explains. “At its height the queue was visible from space, we actually thought the Great Wall of China had shifted to County Down. Then we began to worry that the weight of traffic would cause the earth to tilt on its axis, so contacted the PSNI Space Branch to tell them the planet was at risk.”

Fortunately disaster was averted when Wilbert spotted a friend looking over a gate at some sheep and stopped to join him, however police have since confirmed that 946 vehicles were in the queue, a new world record.

When we asked if he would ever try to beat his record, Mr Campbell said that he might, but only on the road to Banbridge “for Rathfriland is a right dunghole.”