Everyone now living on tinfoil parcels from the fridge, say reports 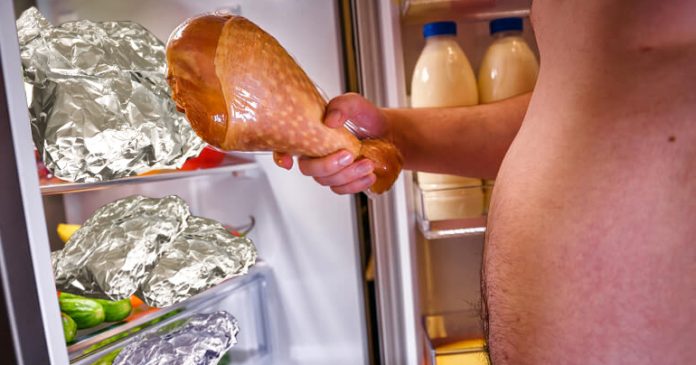 Food sales at local supermarkets have nosedived as people ignore buying fresh produce in favour of eating old stuff they wrapped in tin-foil and bucked in the fridge days ago, it has emerged.

“I’m not even sure what this is!” admitted hungry Belfast man, Russell Sprout, as he gnawed his way through a meaty substance he’d hoked out of a crumpled lump of silver paper at the back of his fridge.

“But it tastes lovely… and so does that brown stuff on the dinner plate that’s balancing between those other tinfoil parcels and the half bottle of Shloer on the second shelf,” he explained.

The phenomenon is set to continue until at least tomorrow according to experts, with several meals being concocted from increasingly unidentifiable mush stowed away in fridges across the country.

“Some households use their leftovers to make a rake of diminishing Christmas-style dinners of increasingly worse quality,” explained seasonal nutritionist, Gus Fatt. “They’re at home now, trying to psyche themselves up for yet more turkey and ham by peeling spuds in their own tears!”

However many local families simply invent new meals to use up the excess food from Christmas. “I was just around at my neighbours house and he was serving up Twiglets topped with puréed Quality Street on a bed of squashed mini sausage rolls!”

“And to make matters worse, we’re all down to the last of the Christmas booze as well,” he sighed, as he poured himself a glass of Lynx Africa.