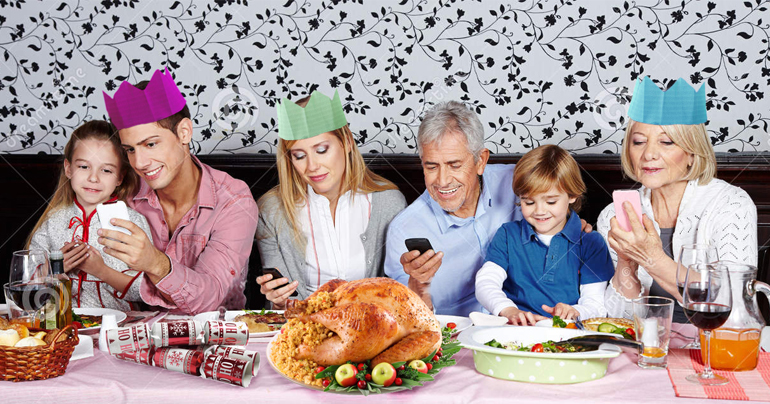 Christmas dinner was ‘lovely’ and everyone is now ‘totally stuffed’ according to official Facebook stats released moments ago. The popular social media network, which has been helping dinner tables stay connected for over a decade now, revealed that Christmas 2015 has been their most successful to date, enabling more conversations than ever between friends – whilst family are trying to talk to them.

‘Merry Christmas Everyone’ wrote everyone on Facebook this morning to everyone else, in a heartwarming personal message. Then, in an outpouring of seasonal goodwill that Buddy the Elf himself would be proud of, 2% of their 500+ friends warmly replied to their yuletide salutations by pressing a HTML link saying ‘Like’, reportedly causing a tiny snowflake to fall in Lapland.

“Soooo excited to get an iPhone 6s” said former iPhone 6 owner Laura Kirby on Facebook this morning. “The addition of the letter Smakes all the difference. Can’t wait to precisely sync my apps, data and personal settings and start using it. I won’t know myself!” she squealed.

Sarah Turner, who flew back from Australia to spend Christmas at home, told Facebook that she was ‘delighted’ with her new Samsung Galaxy, using it today to post Instagram photos of the dinner her dad had been up all-night cooking. “Been waiting for this all year! It’s delicious!” she told everyone in the world, except her dad.

With several hours of Christmas Day still remaining, the “best is yet to come” according to Lars Flomelbow, Head of Facebook’s Dull Data Division. “Right now, most people are ‘totally stuffed’, but that’s not the end of the crazy antics.”

“Soon people are gonna need a ‘wee sleep’ and after that, a ‘good redd out’, which will take us nicely up to Beer O’Clock. It’s been the most exciting Christmas for years!”

Some families slammed Smartphones however, claiming that they ruin the togetherness of the holiday season. “I just find them very anti-social,” complained local father Bazinga Brennan.

“That’s why we bought a new connected Smart-TV,” he revealed. “Now we can all sit together in the living room and enjoy everyone else’s Christmas as a family!”