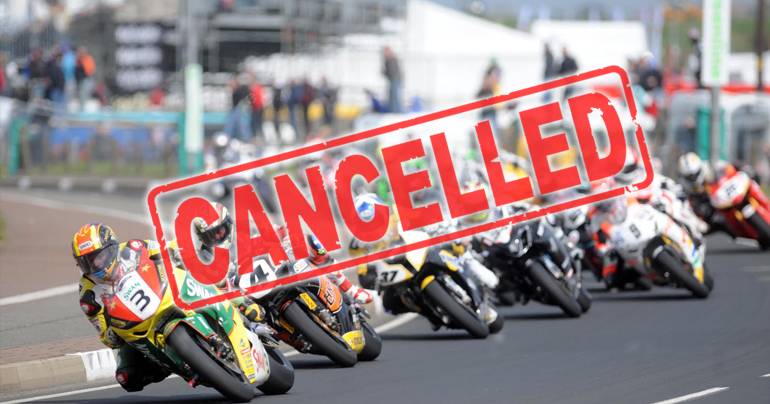 Organisers of the North West 200 have apologised to motorsport fans this evening, after Saturday’s racing schedule was sensationally cancelled at short notice, for unexplained reasons*. However with thousands of people already pouring into Portrush for the weekend, embarrassed promoters are trying to make the best of the situation by telling people to ‘come along anyway, for the craic like’

Head of Marketing Paidraig Kawasaki said “Given the circumstances, we appealed to the local council, and on compassionate grounds they have agreed to let race fans pitch tents in random fields, park motor-homes on private property, play loud country music, drink massive carryouts and trample all over Portrush golf course whilst drunk.”

“We realise this isn’t what fans had their heart set on doing naturally. Everyone wanted to concentrate on the racing, but hopefully people will still enjoy the day,” he continued as he cooked us lunch on a disposable BBQ precariously perched on someone’s garden wall – for just a fiver.

Whilst the professional racing bikes won’t be in town tomorrow, the council have assured fans they’ll still be able to get a ‘good jook at quare n snazzy motoryokes’ throughout the day.  “Aye we’ve opened a special carpark where amateur motorbike owners can park their bikes safely whilst standing around all day, drinking cans and slabbering about how class their’s is,” said council spokesman Ivan Ducati. “It’s a world first!”

However not everyone is convinced by the new format. “Och it’s just not the same!” said race enthusiast and off-duty UTV weather psychic, Frank Michelin. “I’m going to have to drink them 24 cans of Tennents Super myself now and do wheelies up and down main street just to cheer myself up!”

“Usually 12 would be enough!” he lamented.

As we went to press however a glimmer of hope emerged for some competitive racing tomorrow.  It is understood that the Balmoral Show organisers have made an exclusive offer, which if agreed, will see Saturday evening’s famous ‘super-bike’ section replaced by a fifty-strong ‘super-tractor’ race around Coleraine mountain.  Whilst the details are still sketchy, it appears the drivers will be required to circumnavigate the course, whilst picking up bales of safety straw, honking the horn at ‘gud lukking weemin’ and shouting amusing rural pickup lines.

“Jees sur, she’s a quare back axle on her!” remarked one local as the first Massy Ferguson rolled into town, “This tractor racing cud take aff, now I can blink away to myself and not miss anything.”