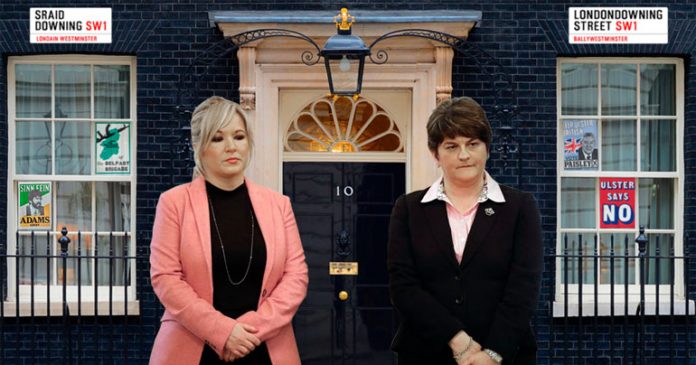 The on-going political shenanigans at Westminster took an unusual twist today when it emerged that top Tories have invited Arlene Foster and Michelle O’Neill to take over from embattled UK Prime Minister Theresa May.

“It’s clear that Mrs May has to step down,” we were told by our high level source in the Conservative Party. “We need firm hands at the wheel – leaders who are used to dragging out a talks process and who can somehow remain in power despite achieving absolutely nothing.”

“Mrs Foster is well in with the Brexiteers in my party and Ms O’Neill will get the backing of Jeremy Corbyn, so between them they should win cross-party support.”

It is understood that the two leaders have already begun planning their DUP/Sinn Fein coalition government. With his wide knowledge of all things economic, Sammy Wilson is a shoe-in as Chancellor of the Exchequer, and Gerry Kelly is O’Neill’s choice for Minister of Defence.

“He’s promised to introduce some kind of military council to run the army, which sounds like a jolly good idea,” says our source.

Mrs Foster also hopes to ‘simulate’ economic growth by expanding the RHI scheme to the rest of the UK, and has drawn up plans to introduce some Northern Irish style Britishness by banning Gay marriage in England and closing all the pubs over Easter.

Meanwhile her Sinn Fein co-leader has already erected a sign saying Sráid Downing on the end of their street and painted “You are now entering Free Westminster” on a gable end of the House of Commons.

*Since this story was first published 3 minutes ago it has emerged that none of this is true, and that our high level source was actually a drunk man with a posh accent. The next Prime Minister is actually going to be Mr Tumble.