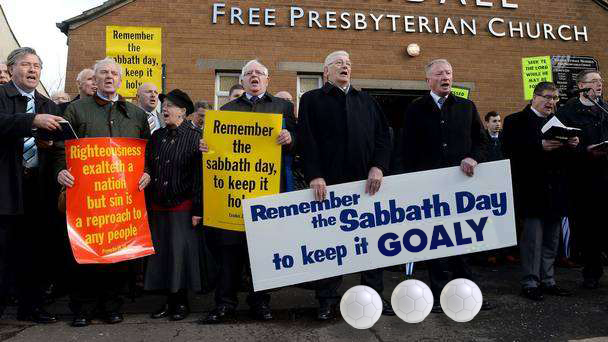 Free Presbyterians took to the streets around Windsor Park today to protest as Northern Ireland earned three unholy vital points that took them closer to qualification for the European Championships.

Speaking before the match, the Reverend David McIlspleen condemned what he described as “a clear breach of the Sabbath,” and told passing fans that the Lord would ensure that their team would be ‘punished’. “Northern Ireland cannot expect to win this game,” he said, “and neither can Finland, clearly. A draw, with several career threatening injuries on both sides would be a fair result in the eyes of Jehovah.”

Things appeared to be going to plan for Rev McIlspleen after an early goal was bizarrely disallowed, possibly due to some divine intervention, but, according to the fans, more likely due to the referee being a wanker. However soon after Kyle Lafferty scored twice to send the crowd into a frenzy, with only a late Finnish finish marring an otherwise excellent performance by the home side.

Nevertheless the Rev McIlspleen remained unrepentant. “Whilst Northern Ireland may have got a positive result, the Lord’s displeasure was there for all to see. There was a brief shower of rain mid-way through the second half and at least one member of the crowd injured himself during the goal celebrations.”

“As it says in the book of Job, chapter 4, verse 3: ‘thou shalt not play of the football on the Sabbath day, and anyone found doing the bouncy shall be smitten.'”

Meanwhile DUP politicians were left reeling by the result, unable to post their traditional vote seeking social media celebrations.”I didn’t watch it, of course,” said East Antrim MLA Walter Walterson, “but I accidentally heard the score on someone’s car radio. I’d say ‘well done’ to the team, but I might end up in hell, or be deselected next election.”