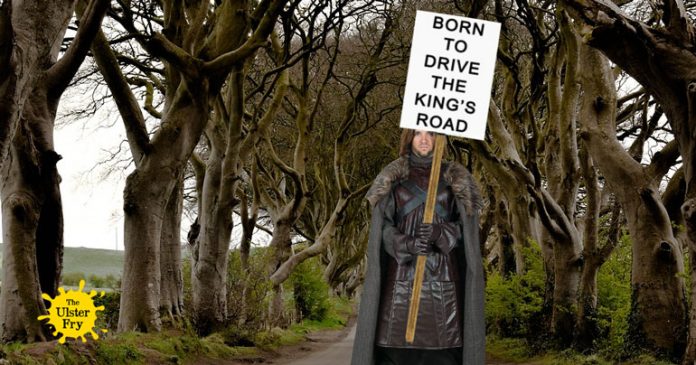 Angry Game of Thrones fans have established a “Twaddel style” protest camp at the Dark Hedges in Country Antrim, furious that they are no longer allowed to drive down their traditional route.

Fans of the show have flocked from all corners of the Seven Kingdoms, leading to fears of Medieval Fantasy based violence, possibly involving gratuitous sex.

“This site is part of my heritage as a loyal Game of Thrones fan! We have driven this route ever since the Battle of the Blackwater, and we will drive it again….”

The Dark Hedges were erected accidentally by HBO producers in 2006 for their hit show The Sopranos, after they forget it was based in New Jersey and not a couple of miles from Armoy.

However the trees later found a use in a 10 second sequence in Game of Thrones and have been a site of religious significance for the Thronebyterian faith ever since.

Meanwhile Hugo Nothing, the leader of the King’s Road Residents Collective, told us that the protesters should stick to their own areas. “These so-called fans have made a right mess since they started coming here. They’ve got a brothel in one of the trees and there’s always dragon shite all over the pavement.”

Since going to press The Ulster Fry has learned that everyone on both sides of the dispute has been killed at a wedding.