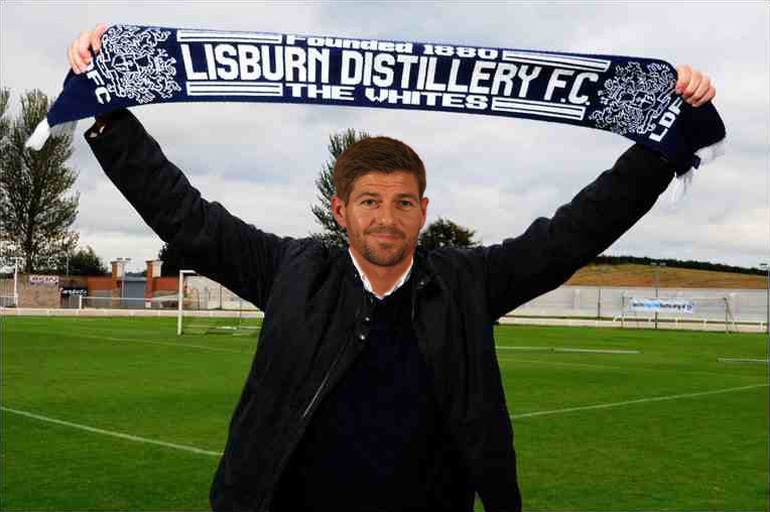 Bookmakers have suspended all betting on Steven Gerrard’s next club amid rumours that the Liverpool captain has already agreed terms with local side Lisburn Distillery.

The move came after Gerrard was spotted getting off the 238 Goldliner at Sprucefield, before climbing into a waiting cab to be spirited away for talks with club officials. As yet there has been no confirmation from either club, but our unnamed source at Liverpool, right back Glenn Johnson, told us that Gerrard was a longstanding admirer of the Lisburn side.

“Distillery’s is always the first result that Stevie looks for after we come off the pitch,” said Johnson, “he was always banging on about wanting to finish his career playing for ‘the Whites’. We thought he was talking about Real Madrid, but it looks like we had the wrong ‘los Blancos’.”

Surprisingly it turns out that the one time England captain has a hankering for all things ‘Northern Ireland’. “He likes nothing more than a pastie bap before a game,” Johnson told us, “and usually has Irish music going on the team bus – a bit of Van Morrison, maybe some Philomena Begley. To be honest it seems like the right move for him, although it’ll be a big step up in quality from what he’s used to at Liverpool.”

It seems like the move would go down well with Gerrard’s wife, Alex. According to her close friend and fellow WAG Coleen Rooney, “she’s well into her shopping and socialising, so she’ll love the big city atmosphere in Lisburn.  She’ll have Bow Street Mall on her doorstep, and that big Marksies up at Sprucefield. When my Wayne and the England lads come over they can always head for the bright lights of Banbridge and hit the Coach or the Bannville for a bit of clubbing.”

Distillery manager Tommy Kincaid said he was hopeful that the move will be completed ‘within days’ but insisted that Gerard would have to prove himself to his new team mates. “Obviously he won’t walk straight into the first XI. He’ll need time to adapt to the pace and skill levels of Irish League football, and will be competing for his place against proven performers like Jimmy McIlhagga.”

“This could be massive boost for football here,” IFA President Jim Shaw told the Ulster Fry, “We don’t get many world class performers, outside the big Belfast clubs anyway, and for a player of Gerrard’s standard to have the opportunity to play at the likes of the Welders and Ballyclare Comrades? It’s just brilliant for him.”

“We know Liverpool don’t want to sell to a competitor club, but the chances are they won’t meet Distillery unless it’s in a European Competition. Given Liverpool’s form, that seems unlikely for the foreseeable future.”