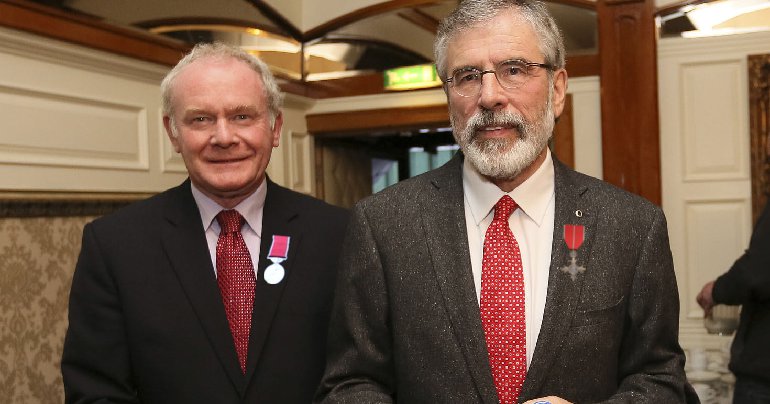 There is growing consternation in Republican circles today amid rumours that several senior members of Sinn Fein, including leader Gerry Adams, have accepted awards in the Queen’s Birthday Honours list.

The information came to light after Mr Adams tweeted a photo of himself alongside Deputy First Minister Martin McGuinness, in which the two men appear to have royal honours pinned to their lapels.

According to heraldry experts Mr McGuinness is wearing a British Empire Medal, while the Sinn Fein leader has the Commander of the British Empire award.

The offending tweet was rapidly deleted, and Mr Adams has been quick to pour cold water on the story. In a written statement the Louth TD states “I am not, and never have been, a Commander of the British Empire. I’ve never even been a Member of the British Empire, although I did spend some time at Her Majesty’s pleasure during the 1970s. These are scurrilous rumours designed to discredit me and destabilize the peace process.”

However the denial is cutting little ice with some of his fellow Republicans. Former ‘Blanketman’ Francis ‘the Fox’ McLaughlin, who shared a bathtub with Mr Adams in the Maze Prison in 1974, told us “Gerry is always denying stuff. I lent him a tenner in the pub two months ago and now he says that although he is proud to be associated with that pub, he was never in it and never got a tenner off me.

I’ve even heard that Gerry Kelly has been awarded the Queen’s Police Medal, something to do with him fixing the wipers on a Landrover during a riot, I don’t know what to believe anymore. ”

A spokesman for Buckingham Palace has stated that the Queen refuses to comment on individual awards, but he did confirm that no honour had been conferred on former First Minister Peter Robinson. “Her Majesty did not call him a ‘Count’,” he stated, “she was misheard.”