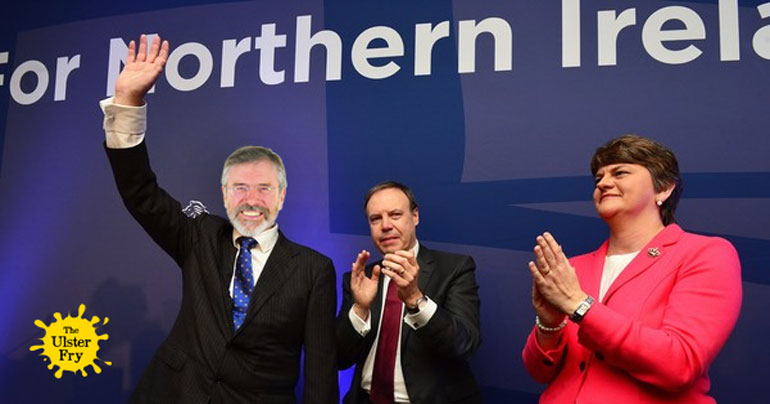 Gerry Adams was the surprise guest at today’s DUP election manifesto launch, and was greeted warmly by the party faithful.

“Thank God you’re here,” North Belfast MP Nigel Dodds was heard to whisper to the Sinn Fein President. “We thought were on a hiding to nothing this election, what with all that RHI stuff floating about. Then it occurred to us, let’s wheel out Gerry to scare the bejaysus out of the masses.”

The bearded republican was given a hearty welcome by DUP leader Arlene Foster, whose speech served as a warm up act for her republican opponent.

“You’ll all know the man I’m about to introduce,” she told her audience, while her surprise guest loomed in the shadows waiting for his star turn. “He’s been knocking around the political circuit here for years, serving his time with some of the greats –  and now he’s very kindly agreed to come along here today to help us get this show on the road.”

Mr Adams then took centre stage and went through a range of his most famous impressions – including Fungus the Bogeyman, Frankenstein’s Monster and the Creature from the Black Lagoon – sending the DUP support into paroxysms of fear.

“This is just what we came for,” Councillor Walter McIlrobinson told us as he changed his underpants. “No one give me the election willies more than thon auld fecker, and I’ve had more election willies put up me than I care to remember.”

Following the launch the assembled throng made their way to a nearby church hall for light refreshments, with entertainment provided by Ballymoney hip-hop act, MC Rea and the Renewable Beat Incentive.