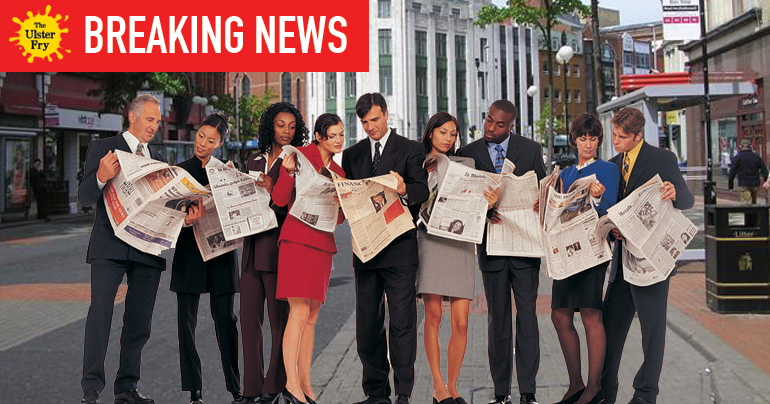 As Northern Ireland awoke to the news that some over-eager political party activists may have used the media to sway public opinion on key political issues by calling into a radio station, the Norn Iron Telegraph issued a stinging “hands off” rebuke to any would be newcomers entering the arena.

“Back off!” shouted angry newspaper editor, Gayle Marcher, on the steps of the newspaper this morning.  “Using the media as a platform to push a potentially hidden agenda or personal political bias is our job! We’re delighted to have exposed the clever actions of these crafty so-and-so’s for everyone to see!”

“Now, does anyone know if they’re on LinkedIn?” she asked quietly.

Local political commentator John-Jeffery Soapbox explained. “It’s a bit much to expect our politicians to actually answer questions on stuff like!  They work hard enough as it is. Sure look at poor Arlene yesterday! Wasn’t fit to answer a single question with that oul bug going about.”

“I think we should scrap the whole Q&A craic in politics and jump straight to letting them tell us how to think!” he added.

“I mean… it works for the newspapers doesn’t it?!”