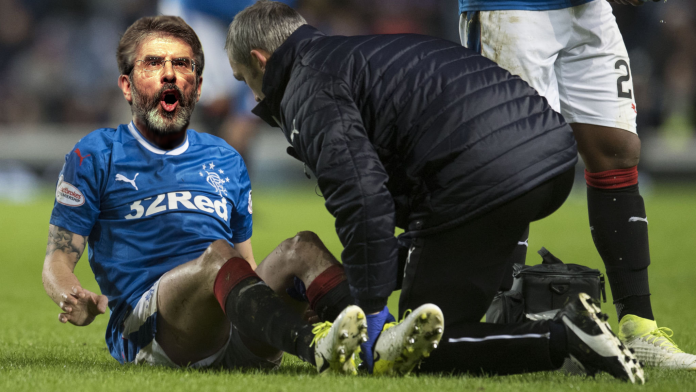 The career of veteran Sinn Fein United player Gerry Adams hangs in the balance, after a freak training accident left him with a broken Metatarsal in his foot.

The experienced whinger had been on trial with Glasgow Rangers when the injury occurred, and it now looks like his dream move lies in ruins.

“We’d high hopes for Gerry,” says Rangers manager Steven Gerrard. “He can play down the left or right wing whenever it suits him, and, while he’s not as explosive as he used to be, he can still pull off shots from all angles.”

Mr Adams’ controversial career began in the early 70s. After spending time at Long Kesh Rovers he came to prominence when he moved up front for Sinn Fein in the 80s and 90s. As a tricky centre forward, he was well known for fooling officials when accused of fouling the opposition.

Later in his career he moved to a more deep lying role, taking a back seat behind newcomers Mickey O’Neill and Barry-Joe McDonald, though many observers believed that he continued to pull the strings of the Sinn Fein side.

Now in the twilight of his career, many thought ‘el Beardo’ would make a lucrative move to Major League Soccer in the US, but when Rangers came came calling, Gerry jumped at the chance of playing for his boyhood favourites. Sadly, that ship seems to have sailed.

The club’s shirt sponsors 32 Red are said to be secretly relieved however, as Gerry is known to favour rival betting firm, 32 Green.