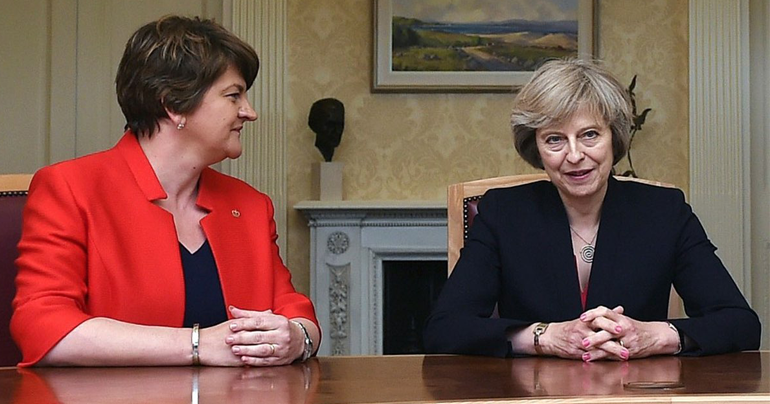 Tory supporters across the UK are ‘extremely concerned’ it has emerged, after Googling the Democratic Unionist Party and discovering they are even more hateful than the people they voted for.

“I’m absolutely disgusted.”revealed 31 year old Tory fan, Branston Pickle. “I mean, blocking a woman’s right to have an abortion is terrible. It’s only fair you allow children to be actually born before you stop giving a shit about their welfare!”

“I can’t believe they banned gay blood donations!” revealed Rita Daly-Mailey. “It’s good manners in England to bury your homophobia deep down and pretend to be offended when ‘gay’ is used as a derogatory term. How have they managed to get elected by just being themselves?!”

It also seems that terrorist links are suddenly a concern for Tory voters.

“I was shocked to find out the DUP were endorsed by paramilitaries last week!” revealed Zach Bencher. “I mean ‘OK’ so we crucified Corbyn for his tenuous link to Republicans whilst overlooking the fact that Theresa May is selling weapons to the Bank of ISIS…. but at least she made us a few quid to help keep the country safe from them! Right?”

However not everyone was so gloomy about the coalition.

“I think the DUP are an excellent fit.” revealed Conservative voter, Oz Deritty. “I was reading about that Renewable Heating scandal, and they showed a real aptitude for allegedly taking the tax contributions of working class people and investing it into their friends and benefactors instead. I think they’ll fit right in!”

Despite this many Tory voters remain unconvinced by their new DUP allies. “I took a heart attack when I seen that photo of Sammy Wilson!” revealed cardiac arrest victim, Ann H Mess.

“But it’s ok” she assured us. “The ambulance should be here any day now!”