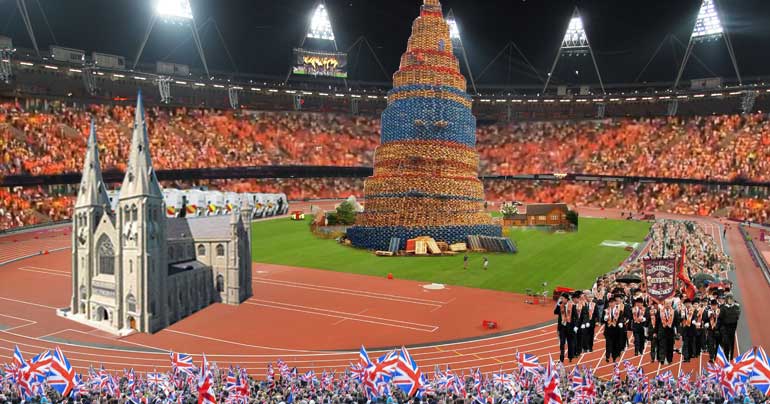 “Aye we’ve been thinking about this for some time” said NIO spokesman Herbert Blowin.”Every year thousands of people enjoy themselves peacefully at Twelfth parades around the country, but in Belfast they all go clean buck mental. It’s costing us hundreds of millions of pounds to police these things so we may as well spend the same money on something useful.”

It is understood that the new £250 million arena will have specially designed “marching track”, complete with puddles, traffic lights and manholes, and will include a replica Catholic Church where bandsmen can play whatever shite they want or dance around looking completely ridiculous. Close to the church an “away end” will allow travelling fans be offended to their heart’s content, and a media section will be provided for press who like to gather at flashpoints.

A number of bars, shops and businesses will operate within the stadium, but these will close on parade days to replicate the City Centre atmosphere. Instead a range of crap fast food outlets will serve traditional Twelfth fodder like half-cooked burgers, and off-licences will sell only Buckfast and White Lightning cider. Whilst many stadia have fan zones outside the arena, the new ‘Parade Ground’ will instead have a riot zone, where the two sides can buck plastic bricks and foam bottles at each other over a 20 foot wide trench in front of a mural depicting the Ardoyne shops.

Speaking through a megaphone, the Order’s Belfast Master George Shitkick gave a guarded welcome to the proposals. “We know that everyone is getting sick of watching a shar of drunken arseholes chucking stuff at the police in North Belfast, but unless an additional £250 million is spent on an exact replica of our traditional route, including a Twaddell camp, we’ll reject it. This plan is typical of the lack of investment in Loyalist areas, all they do is waste money on policing our riots.”

Ardoyne resident Phelim O’Croissánt was also cautious. “We spend all our days off hanging around in front of the shops – we’ll have to be bused down there every Bank Holiday just in case there’s a parade to be offended by .”

As the news became public, rioting immediately started in Derry. “Themuns in Belfast get everything,” said local hood Flapjack Doherty, “I’m away to burn an Arts Centre because I think it’s the Apprentice Boys Hall.”