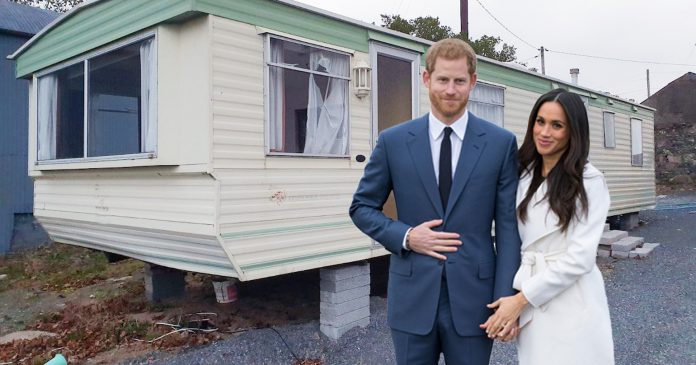 The world of royalty has been shaken to its very core after the Duke and Duchess of Sussex announced that they are to step back from their duties to move to the sleepy Ards seaside village of Ballywalter.

“Harry and Meghan fell in love with the Ards Peninsula when they flew over it on their way to America,” explains BBC Royal Correspondent Nicholas Witchell.

“They spent a secret romantic weekend there a while back,” he told us, “So romantic, they almost ended up copying Posh and Becks by naming baby Archie after the place he was conceived, but the Queen reckoned Portavogie was a girl’s name.”

Speaking exclusively to The Ulster Fry, Prince Harry explained that that the couple hoped to become financially independent ‘in a lock of months’ if they can get a loan from his granny.

“Meghan’s got a job summer job lined up at the Mace and I’ve an interview in the chip shop next Monday,” he explained. “We’ve bought a second hand caravan off Gumtree we can live in til we get on our feet, but our dream is to get our own flat and run an ice cream van.”

“You can make good money at that, especially if you get a load of fags in from Spain and flog singles outside the high schools.”

We suggested to Prince Harry that the jet-set couple might find the pace of life a little slow on the Ards, and got an angry reaction.

“Ach haul yer whisht,” he exclaimed. “Have you seen the beach here? Meghan reckons its better than that Venice one in California. It’s even got electric toilets, you don’t get them in America, and they don’t have Harp and proper Tayto over there.”